American Astronaut Scott Kelly is back home after a year in orbit. 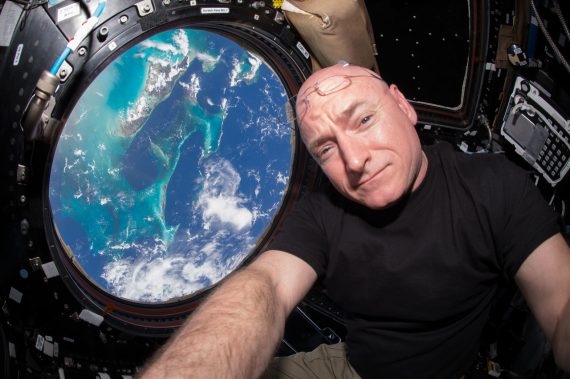 American Astronaut Scott Kelly returned safely to Earth after a year thanks to a Soyuz landing in Kazakhstan in the morning hours of Wednesday as night was still enveloping the United States:

After 340 days in space, Scott Kelly is back on Earth.

Mr. Kelly, who spent the time about 249 miles above the planet aboard the International Space Station, and the Russian cosmonaut Mikhail Kornienko landed on Tuesday at 11:26 p.m. Eastern in Kazakhstan.

Mr. Kelly, in a bulky, white spacesuit, pumped his fist and smiled as he was helped out of his space capsule.

The spacecraft departed from the space station Tuesday at 8:02 p.m. Eastern, a part of the journey that was captured on a livestream.

From Kazakhstan, Mr. Kelly will travel to Houston. He is scheduled to arrive at 11:45 p.m. Wednesday, and will be greeted by NASA officials; Jill Biden, the wife of Vice President Joseph R. Biden Jr.; and his identical twin brother, Mark Kelly, also an astronaut.

Scientists will study Mr. Kelly for the health effects of extended space travel, expecting it to be a steppingstone for a potential trip to Mars. They will have an unusual partner in the research: His twin will also be analyzed.

If you’re waiting to hear Scott Kelly’s perspective on the experience, you’ll have to be patient a little while longer. He won’t address the news media until 2 p.m. Friday. NASA scientists will answer questions on Reddit at 11 a.m. that day, and the agency will also hold a news conference to discuss research accomplishments at 1 p.m.

Mr. Kelly has documented much of his trip on his Instagram and Twitter accounts, which became popular largely because of his distant views of Earth and its otherworldly sunrises and sunsets (he witnessed 10,944 of them). On Day 141, he posted a spectacular video of the aurora borealis.

Combined with his other three trips to space, Mr. Kelly has now spent 540 days of his life in orbit. The 340-day stay far surpassed the previous American record — 215 days — set by Michael López-Alegría in 2006 and 2007. The international record is nearly 438 days, set by the Russian cosmonaut Valeri Polyakov on the Mir space station in 1994 and 1995.

“I could go another year if I had to,” Mr. Kelly said last week in a wide-ranging news conference. He was looking forward to jumping in his pool, he said, adding that the hardest part was being away from friends and family.

The space capsule descended gently through the stratosphere, like a falling feather. As it slipped through the clouds, a strange land loomed below.

Just as the craft was about to touch the surface, six engines suddenly fired simultaneously, bringing the Soyuz descent module to a cushioned stop.

Scott Kelly looked out the window at the flat, barren terrain around him.

It wasn’t Mars. It wasn’t even the moon.

But after 340 days in space, anywhere on planet Earth felt like home.

“The air feels great out here,” Kelly quipped, according to a NASA spokesman, as burly Kazakhs in heavy coats and furry hats hoisted him from the scorched capsule. “I have no idea why you guys are all bundled up.”

Then he pumped his fist in celebration, zero-gravity-weakened muscles be damned.

Over the past 11 months, Kelly and Russian colleague Mikhail Kornienko have traveled 144 million miles through space, orbited the globe 5,440 times and experienced 10,880 sunrises and sunsets. Kelly’s 340-day stint in space is a record for an American astronaut, as is his total of 520 days spread over four missions.

Even more than his records, however, it’s Kelly’s attitude that has made him a crowd favorite back on the Big Blue Marble. He has performed death-defying spacewalks, successfully grown (and eaten) lettuce in outer space and chased a colleague around the International Space Station in a gorilla suit. He has chatted with everyone from President Obama and Stephen Colbert to school kids.

Perhaps most memorable of all, he has snapped more than 1,000 stunning photos of the planet, sharing them with his nearly 1 million Twitter followers with the hashtag “#yearinspace.”

And that’s what it felt like — for all of us.

“Talking to someone who’s in orbit. … It’s like I’m an astronaut right now,”gushed Colbert.

Kelly’s safe return Tuesday night is, therefore, a bit of a mixed blessing. We have regained an Earthling but lost a colorful and quirky view of our planet from 250 miles up.

His adventure began with a March 28, 2015, blastoff. But even before the rocket engines roared to life, Kelly was already broadcasting his extraterrestrial experience as no American astronaut had ever done before.

On Feb. 15, 2015, he posted a photo of himself sitting in a nearly empty NASA office with a sign that read, “BE BACK IN 365 DAYS.” The day before liftoff, he added: “Just awoke from pre-launch nap. Last time in bed for a year.”

Kelly made it feel as though we were in the cockpit with him. He was our ambassador to outer space.

The experience continued aboard the ISS. In his first tweet from space, he thanked first lady Michelle Obama for wishing him good luck.

“Thank you. Made it!” he wrote. “Moving into crew quarters on @space_station to begin my #yearinspace.”

More than a thousand tweets followed, almost everyone of them featuring a jarringly vivid photograph of the planet. From the space station, sheets of icebergs appeared to be shattered glass, deserts resembled beautiful tapestries and the Himalayas — the tallest mountains on Earth — looked like a weary world’s wrinkles.

Many of Kelly’s photos were unbelievable. Swirling red and green auroras seemed like scenes from “Star Trek.” The Milky Way was a sparkling sea of stars surrounding Scott. And every 90 minutes, he was treated to the most spectacular sunrise or sunset a human had ever seen.

From up high, he watched as immutable and eternal forces dictated events below. He witnessed a historic snowstorm bury the East Coast and saw smoke rise from wildfires moving across a drought-stricken California.

Even as his photos captured hearts and minds on Earth, Kelly still had a day job to do in space. Much of it involved helping NASA prepare to send astronauts to Mars in about 15 years.

In perhaps the most important experiment, Kelly served as a test subject for the long-term effects of living in outer space, where zero gravity slowly saps muscle strength and bone density. Kelly tested his own blood, performed ultrasounds on himself and got fellow ISS crew members to examine his eyes to see how he was coping with his year-long space sojourn. The results will be compared with those from his twin, Mark, a retired astronaut back on Earth.

“Scott’s the guinea pig in space, and I’m the guinea pig on Earth,” Mark Kelly said on the “Today” show. “We have a good sense of what it takes to fly in space for six months, but if one day we decide we want to go to Mars or some other destination in the solar system, we know what the engineering is to do that, we don’t know a lot about the human body. So Scott spending a year in space and NASA studying both of us, because we are genetically the same, that’s going to give NASA a lot of information to reach out into the solar system.”

You can find all of the photographs that Commander Kelly took on his Twitter and Instagram accounts, both of which had nearly one million followers by the time Kelly returned to Earth, and they’re also stored on a NASA website where they are sorted by type. As someone who was following Kelly on his mission since before he actually left Earth last March, I can say that I’m going to miss the near daily photographs that would be shared via his social media accounts, including morning and evening images of either the Earth or the view from the International Space Station. Kelly isn’t the first astronaut to use social media to send messages back to Earth, indeed it’s become a common practice for everyone on the ISS, including not only American astronauts but also Russian cosmonauts and the astronauts from other nations that have been on the International Space Station over the past several years, such as Italian Astronaut Samantha Cristoforetti, who was on ISS from November 2014 through June 2015 and documented much of her time via her Twitter account as well, including the time she managed to get a uniform from Star Trek: Voyager on board. Nobody has been quite as prolific in sharing images from space with those of us on Earth as Kelly, though, and his return leaves a gap on Twitter that will hopefully be filled by British Astronaut Tim Peake, American Astronaut Tim Kopra, and the Americans set to join the ISS crew later this year.

Beyond the fun of Kelly’s Twitter account, of course, there was serious science behind his mission. While some astronauts and cosmonauts have spent more than a year in space over the course of several missions to the ISS, nobody had ever before spent an entire year in space before. If humans are going to travel to Mars, though, they are going to need to spend at least that long in a ship on the long journey between the third and fourth planets and NASA had almost no idea what the physiological impact of that much time in weightlessness would be on the human body. This mission will allow them to not only compare the before and after physical examinations of Kelly and his Russian counterpart, but also provides the unique opportunity to compare Kelly to an essentially exact copy of himself in the form of his twin brother Mark, husband of former Congresswoman Gabrielle Giffords, and himself a retired NASA Astronaut. Both before Commander Kelly left on his mission and while he was in space, Mark Kelly underwent the same medical monitoring that his brother did on the Space Station and he will join his brother in post-mission testing that will compare the two down to the microscopic, genetic, level to determine what impact a year floating about Earth may have had on Scott. All of this will be used to further prepare for an eventual mission to Mars.

Anyway, welcome home Commander Kelly. We’ll miss the photographs but you’ll finally get to use that swimming pool you’ve been talking about for the past year!