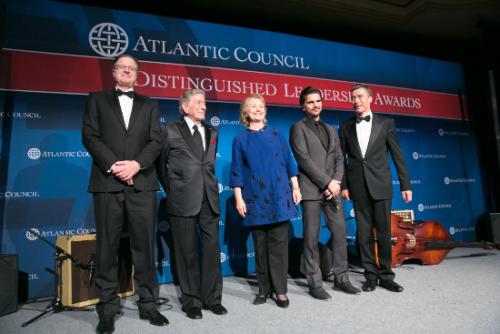 I’ve spent most of the day writing up the event for the New Atlanticist blog. Some highlights:

In a night filled with sober speeches on international security and economic issues, Henry Kissinger provided some levity concerning the rumored presidential aspirations one of the night’s awardees, Hillary Clinton.

Introducing Clinton at the Atlantic Council awards dinner, Kissinger, who served as secretary of state under presidents Nixon and Ford, talked about the transition to civilian life that Clinton now faces. “I know those are difficult times,” Kissinger intoned, “When your hand twitches to reach a telephone to give some order.” Pausing for effect, he added, “When you want to tell someone they didn’t get it quite right.”

He says his own recovery was aided when he “suddenly realized” that ”at least four secretaries of state became president.” That insight “sort of started focusing my mind even though there was a constitutional provision that prevented me from doing it.” He added, “I thought up all kinds of schemes to get around that.”

So, Kissinger joked, “I want to tell Hillary that when she misses the office, when she looks at the histories of secretaries of state, there might be hope for a fulfilling life afterwards.”

NATO Secretary General Anders Fogh Rasmussen declared Europe and North America “need to strike a new transatlantic deal” based on “people, science, and culture” in order to “make our community of values stronger, wider, and deeper.”

While Rasmussen renewed his longstanding concerns about “a growing imbalance in the security contributions made by America and Europe” and urging that “European nations need to do more, and to do better,” he emphasized that “NATO is not  just a  military Alliance.”

So, while “to remain America’s partner of choice, Europe’s choice must be to become the strong partner that America needs,” that partnership must expend beyond collective defense. The secretary general reminded the audience that “The Washington Treaty also commits all Allies to strengthening their free institutions.  Promoting conditions of stability and well-being.  And encouraging economic collaboration.”

In short, Rasmussen explained, “NATO was formed to defend our freedoms. Personal freedom. Political freedom.  And economic  freedom.  These values are more powerful than any military might.”

Former US Secretary of State Hillary Clinton declared that NATO is “just as important in the 21st century as it was in the 20th” and warned, “We can’t afford to let the greatest alliance in history slide into irrelevance.”

Speaking at the Atlantic Council’s awards dinner, where she was honored for distinguished international leadership, Clinton echoed former Secretary of Defense Bob Gates’ fear of “two-tiered Alliance,” noting that NATO has “a shrinking percentage of members willing—and able—to pay the price and bear the burdens of common defense.” She noted that the recent mission in Libya showed the size of the gap in action, noting especially Europe’s lack of independent ISR (intelligence, surveillance, and reconnaissance) capability. Additionally, she noted, ”We saw that fewer than a third of NATO members participated in strike missions.” This, Clinton argued, points to both “economic and political deficits.”

Despite her concerns about the Alliance, Clinton remains bullish on the transatlantic partnership and believes passionately that America’s and Europe’s “security and prosperity remain intertwined.” She noted that she had made 38 visits to Europe as secretary of state.

Clinton argued that the relationship going forward must focus on three pillars: energy, trade, and readiness.

Speaking at the Atlantic Council awards dinner, where he was honored for distinguished business leadership, Watson noted that, ”Over the last 150 years, we’ve seen the greatest advances in living standards in recorded history.” He proudly gave his own industry some credit for that fact, noting that the spread of affordable energy brought “light, heat, and mobility to billions of people around the world,” and drove the Industrial Revolution.

Watson also argued that, while multi-national corporations  ”don’t represent the American government” while abroad, they “do represent American values wherever we operate.” In particular, they can demonstrate the ” advantage of competition, transparency, and fair dealings in the marketplace” and help spread the norms of binding contracts and the rule of law.

This is more important than ever, Watson believes, because “American influence and values are being challenged.” This theme was echoed by the night’s two honorees for distinguished international leadership, NATO Secretary General Anders Fogh Rasmussen and former secretary of state Hillary Clinton.