Monday, The Atlantic published and took down a sponsored article from the church of Scientology. Yesterday, it admitted it had "screwed up." 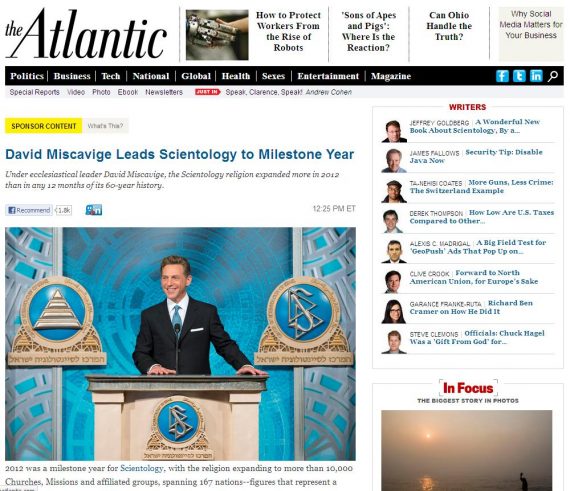 Monday, The Atlantic published and took down a sponsored article from the church of Scientology. Yesterday, it admitted it had “screwed up.”

The Scientology advertisement, composed by tone-deaf propagandists unable to write a sentence about the church’s alleged worldwide expansion without including a superlative – “unparalleled,” “unrelenting,” “unprecedented” (twice) – was taken down just before midnight after being up for about 11 hours. (See Erik Wemple’s tick-tock.)

A cached version of the Scientology advertorial is preserved on freiz.it, but be forewarned that there isn’t much there to interest you unless you’re an admirer of the church and love to read nice but bland things about it, or you detest Scientology and enjoy nothing better than to have a good laugh at the church’s expense and that of its “ecclesiastical leader,” David Miscavige. It’s really that lame.

The Atlantic‘s rambling apology, which admits to having “screwed up,” “made a mistake,” “failed to update … policies,” etc., and promises to “put things right,” concerns itself mostly with errors of process without going into what the company’s existing advertising policies might be. But as instant apologies go, it covers the company’s ass for the time being.

Setting aside the substance of the Atlantic‘s advertising policies, the Scientology advertorial illustrates a dual break-down. First, the church misserved itself by producing such a dorky exercise in propaganda. Can its executives and advertising department be so oblivious about how media works that they didn’t know the ad would subject them to ridicule from non-church members and a yawn from the faithful? If I ran the church, I’d be dispatching its copywriters to “The Hole,” Scientology’s alleged reeducation camp in the California desert.

If I ran the Atlantic‘s advertising department – the most frightening thought I’ve had all day! – I’d not have allowed the Church of Scientology to run that ad in the first place. If an ad director decides to accept a customer’s advertising, he doesn’t want one-off business. He wants repeat ads, from the beginning of time to the end, and he therefore looks out for the customer’s interests. Assuming that ad dollars from the Church of Scientology can, in good conscience, be accepted – a view I hold – the Atlantic‘s ad director was remiss in not taking the church aside and saying, “Look, I know you’re suffering a public-relations beating out there with the publication of Lawrence Wright’s expose, Going Clear. But the North Korean quality of this advertorial singing a song of praise to David Miscavige is unwise, and in your best interests I reject it. Let’s see if you can do better.”

The Atlantic was remiss in another way – as are many other websites that publish “sponsor content.” Many advertisers (unwisely) want to make their copy look as much like editorial copy as possible so that naïve readers will confuse it with the genuine thing. In the case of the Scientologyadvertorial, it is almost indistinguishable from the look and feel of the Atlantic‘s usual editorial copy. The only effort made by either the church or the Atlantic to inform readers that the content came directly from an advertiser was a yellow-shaded “Sponsor Content” notice at the top of the piece and a tag at the bottom. The church and the people in charge at the Atlantic appear to have stupidly co-conspired to muddy the distinction. Shame on both of them for not providing more design clues that the advertorial was a Scientology pitch.

Digital sponsored content — aka “native” advertising — has existed only as long as the internet, and it’s really only the last couple years that it’s come to be seen as a primary engine of growth for innovation-friendly publishers like The Atlantic, Buzzfeed and Gawker Media (and you can add FORBES to that list as well).

For the most part, mainstream media organizations reserve the right to accept all these types of advertising while refusing any individual ads they deem offensive or unethical. Even The New York Times, which styles itself the gold standard in most matters, doesn’t have any explicit policies that would prevent it from taking Scientology’s dollars (unless you count the rule against advertising “occult pursuits,” and I’m not going near that one).

The second issue is whether The Atlantic handled this particular piece of sponsor content in the right way. It obviously didn’t, particularly in screening out negative comments in a way that created an Astroturf-like false impression of favorable reader response.

Would anyone have noticed if the Church of Scientology’s bad odor hadn’t ensured a high degree of scrutiny? Probably not. Should that bad odor alone have been enough to get this advertorial spiked? Definitely not.

The Atlantic has gotten a good deal of ribbing about the whole affair on my Twitter feed and prompted a brilliant satire from The Onion: “SPONSORED: The Taliban Is A Vibrant And Thriving Political Movement.”

I’m having trouble seeing what the big deal is here. [Full disclosure: I’ve written 18 pieces for The Atlantic; they’ve even paid me for a couple of them.] Print magazines have been publishing “sponsored sections” and “sponsored articles” clearly intended to be seen by readers as editorial content from the magazine for at least a quarter century. It’s an annoying practice, frankly, but I get the lure of the practice given the brutal economic realities of the business.

Really, the only thing The Atlantic did here that was unethical was spiking unfavorable comments on the ad while leaving the favorable ones. But the mistake was in allowing comments in the first place. Presumably, that’s the default position with the site’s content and they neglected to disable it for advertorial content. Oops.

But Shafer is probably right that the magazine was short-sighted in not telling its advertiser that the ad copy was embarrassingly ham-handed.  I say “probably” because I just don’t know the customs of the industry. While I’ve accepted advertising on OTB for years, it’s mostly through automated networks. I’ve only rarely intervened on the basis of content. So, I don’t know whether the advertising department typically works with those seeking to place ads to suggest changes to copy to better target their readership.