The Toomer's Corner trees were poisoned by a rabid Alabama fan. 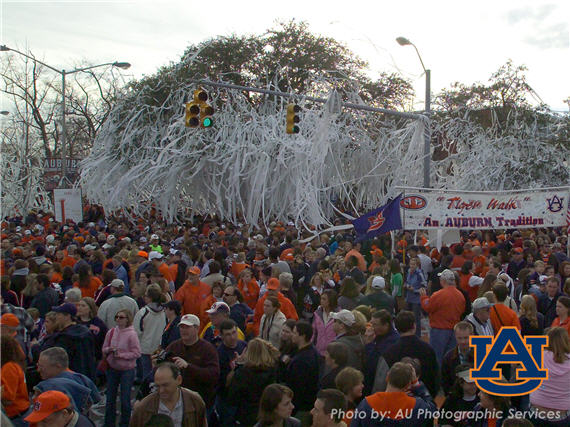 The Alabama-Auburn rivalry is as intense as any in college sports, consuming the state year round. If anything, the intensity is hotter than ever, as the two schools have alternated the last two national championships.

But it’s one thing to root for your team and boo the other. This, however, is quite another:

A 62-year-old Dadeville man has been arrested in connection with the poisoning of the historic Toomer’s Corner oak trees at Auburn University.

A man claiming to be “Al from Dadeville” phoned a radio show late last month, claiming he poured herbicide around the 130-year-old oaks that are the scene of celebrations after Auburn’s sports victories.

“The weekend after the Iron Bowl, I went to Auburn, Ala., because I live 30 miles away, and I poisoned the Toomer’s trees,” the caller told The Paul Finebaum Radio Show, saying he was at the Iron Bowl.

Calling himself “Al from Dadeville,” he said he used Spike 80DF, also known as tebuthiuron, and the trees “definitely will die.” The caller signed off with, “Roll Damn Tide.”

Auburn discovered the poisoning after taking soil samples on Jan. 28, a day after “Al from Dadeville” called Finebaum’s syndicated show saying he had used the herbicide on the trees.

The university said in a statement Wednesday that an herbicide commonly used to kill trees was applied “in lethal amounts” to the soil around the two trees, and that they likely can’t be saved.

Auburn fans traditionally celebrate by using toilet paper to roll the Toomer’s Corner trees, which are estimated to be more than 130 years old.

“We will take every step we can to save the Toomer’s oaks, which have been the home of countless celebrations and a symbol of the Auburn spirit for generations of Auburn students, fans, alumni and the community,” university President Jay Gogue said in a statement.

[Y]ou can’t satirize crazy. And every time we think we’ve seen the most ridiculous SEC antic, the state of Alabama is always there to remind us that we were sorely mistaken. Nope, they’ve seen your crazy and raised it beyond the point of contemplation.

How crazy are football fans in Alabama? Everyone in the rest of the SEC even thinks they’re crazy. Think about this for a moment: the rest of the people in college football’s biggest insane asylum have a profound respect for the insanity that is Alabama.

The country’s most storied rivalry has descended into a vituperative pit of discord that doesn’t befit the actual game. Message boards have stoked the fury, crazies have found each other and bonded on the Internet, this cauldron of small-time convicts and big-time losers has taken over the game and the people with the most at stake in this rivalry — you know, the small minority of fans who actually went to either college — are being swept aside by a rising tide of idiocy. Alabama’s always been crazy about football, but somehow this year the state came completely untethered from reality.

I’m an Alabama alumnus and staunch fan of the football team. But it’s just a game, people.

I was interviewed yesterday morning on a Birmingham news radio station on a related subject, former Auburn quarterback Cam Newton’s mega contract with Under Armour and the crazy money surrounding the sport. The first question was, as a Tide fan, what did I think of Auburn’s winning the championship.

My response was that, while I always root for Alabama to beat Auburn, I root for Auburn to win otherwise. It’s good for the rivalry and good for the state of Alabama for both teams to be great. The host said that a lot of people he talks to feel the same way.

Then there are the idiots who want to ruin it for everybody.

Toomer Corner Oaks Being Cut Down