RAWALPINDI, Pakistan (CNN) — Pakistan’s former Prime Minister Benazir Bhutto was assassinated Thursday outside a large gathering of her supporters where a suicide bomber also killed at least 14, doctors and a spokesman for her party said.

While Bhutto appeared to have died from bullet wounds, it was not immediately clear if she was shot or if her wounds were caused by bomb shrapnel.

President Pervez Musharraf held an emergency meeting in the hours after the death, according to state media.

Police warned citizens to stay home as they expected rioting to break out in city streets in reaction to the death.

Police sources told CNN the bomber, who was riding a motorcycle, blew himself up near Bhutto’s vehicle.

Bhutto was rushed to Rawalpindi General Hospital — less than two miles from the bombing scene — where doctors pronounced her dead.

As the only nuclear-armed majority Muslim country, the home to a large population of Deobandi and Salafist Islamist radicals, and, possibly, the country that’s hosting Osama bin Laden within its borders, Pakistan is a very sensitive country in a very sensitive condition since the unrest of a month ago. Whatever else may happen the situation has probably become more serious now.

I’ve posted additional thoughts of my own at The Glittering Eye. 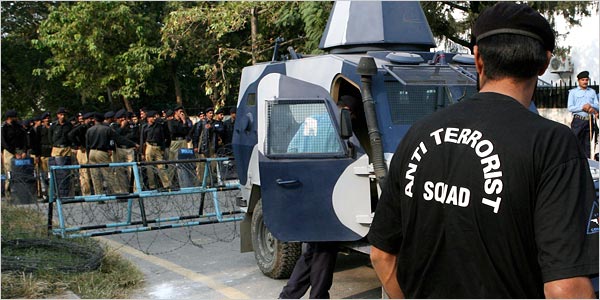