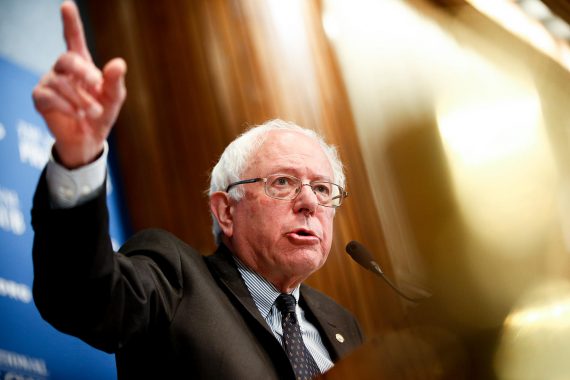 The first evidence that Mrs. Clinton could face a credible challenge in the Iowa presidential caucuses appeared late last week in the form of overflow crowds at Mr. Sanders’s first swing through that state since declaring his candidacy for the Democratic nomination. He drew 700 people to an event on Thursday night in Davenport, for instance — the largest rally in the state for any single candidate this campaign season, and far more than the 50 people who attended a rally there on Saturday with former Gov. Martin O’Malley of Maryland.

The first-in-the-nation caucuses, on Feb. 1, loom as a major test for Mrs. Clinton: She came in third in Iowa during her presidential run in 2008, and anything less than a decisive victory this time would rattle her shell of inevitability and raise questions about her strengths as a standard-bearer for an increasingly liberal Democratic Party.

Mr. Sanders is considered the Senate’s most left-wing member, and he has been inspiring fervor among the Democratic base at recent rallies and town-hall-style meetings, including on Wednesday in the first presidential primary state, New Hampshire.

Mrs. Clinton is far ahead in the polls, fund-raising and name recognition, however, and she is expected to continue to have a much more organized and sophisticated campaign operation in Iowa and nationwide than Mr. Sanders has. Her mix of centrist and progressive Democratic views may yet prove more appealing to the broadest number of party voters as well, while some of Mr. Sanders’s policy prescriptions — including far higher taxes on the wealthy and deep military spending cuts — may eventually persuade Democrats that he is unelectable in a general election.

I’m pretty sure Democrats already think that. While I agree with Jon Stewart that Sanders is a perfectly reasonable politician rather than the kook that he’s made out to be—and especially that there’s something refreshing about a candidate who just says what he thinks rather than presenting soundbytes carefully crafted for each particular audience—Clinton is the prohibitive favorite and everybody knows that. It may be true that there’s a pining among some significant segment of the Democratic nominating electorate for someone further to the left—witness the continued clamoring for an Elizabeth Warren candidacy—most see Sanders as a curiosity rather than a plausible alternative.

Judging from Mr. Sanders’s trip here last week, there is real support for his message — though some Democrats also simply want to send a warning shot to Mrs. Clinton to get her to visit here more.

Mrs. Clinton’s large Iowa staff, which arranged her earlier visits to the state, when she met with small groups on a “listening tour” in carefully controlled settings, has taken the posture of not overreacting to Mr. Sanders or taking him too seriously. The Clinton team did not send anyone to observe or record the Sanders events, for instance.

Other Democratic strategists in the state, unaffiliated with any candidate, said Mrs. Clinton’s aura of inevitability, with a nearly 50-point lead over Democratic rivals in most recent nationwide polls, was one of her greatest challenges.

“At this point, expectations are really probably the toughest thing for the Clinton camp to manage,” said Brad Anderson, who ran President Obama’s re-election campaign in Iowa in 2012.

Almost as important as who wins the Iowa caucuses is the candidates’ finishing order. A strong second-place finish here can propel a candidate as the race heads to New Hampshire and other early voting states.

If Mrs. Clinton wins the caucuses but not by a significant margin, she will risk being embarrassed, and the runner-up will look like a serious challenger to what once appeared to be Mrs. Clinton’s inevitable road to the nomination.

“Let’s say she wins by less than 20 percent,” said Mr. Meyer, chairman of the Tri-County Democrats. “That’s a two-ticket-out-of-Iowa thing.”

This, too, strikes me as fantasy. While I suppose it’s possible for a candidate to catch fire with a bold new message, most of this is based on a vision of the primary process that’s long since gone away. In the days of 24/7/365 news coverage and analysis, nobody sneaks up on us anymore. And, while Iowa and New Hampshire continue to maintain undo and outsized attention in the process, it’s long been possible to ignore one or the other—particularly Iowa—and still coast to the nomination.

Grant Woodard, a Democratic strategist close to the Clinton team but not working for it, said, “They understand they’re going to be challenged, and they’re preparing for that inevitability.”

That challenge may be emerging sooner than expected. The large crowds for Mr. Sanders were a sign of many voters’ desire to hear and meet Democratic candidates in free-flowing town-hall-style gatherings, with policy issues discussed in detail, which Mrs. Clinton has so far avoided. Her campaign has promised that such events will follow this summer.

Mr. Sanders’s stop at a brewery in Ames on Saturday was so mobbed that more than 100 people who could not fit inside peered through the windows.

Again, this is laughable. How many people can fit into a room at the brewery? They’re not exactly designed to stage major events. Like the “overflow crowd” of 700 earlier in the story, it’s a willful distortion of reality.

Along with a picture of the scene he posted on Twitter, Steffen Schmidt, a political science professor at Iowa State University who teaches a course on the caucuses, wrote, “Hillary should worry.” 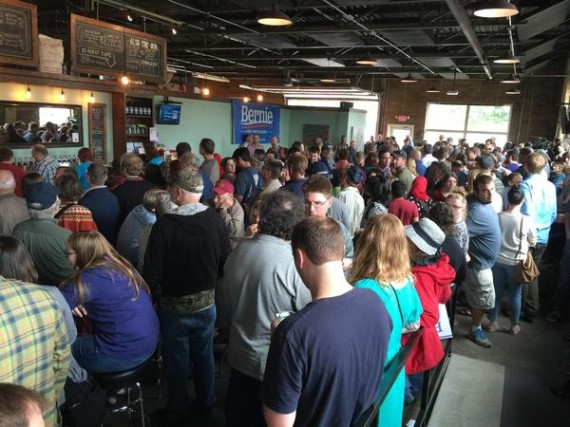 That much is almost certainly true. Once every four years, Iowa is relevant. But nobody outside the state should care that their feelings are hurt because Clinton isn’t playing their game.

But one reason the Clinton campaign may not be visibly breaking a sweat is that it is far ahead in building a network of organizers in Iowa, who are key to turning out voters in a caucus state. The campaign has 30 paid organizers around the state who are contacting Democrats at every level, from likely caucus attendees to local and statewide elected officials. The numbers are sure to grow as the caucuses approach.

Mr. Sanders has just two paid staff members so far in the state. “One of the problems we’re having is things are moving so fast our infrastructure hasn’t kept up with our political reality,” Mr. Sanders said in an interview. His Iowa director, Pete D’Alessandro, said he was planning to hire up to 30 paid staff members by midsummer.

Conversely, I’m skeptical that the number of paid staffers is itself a useful independent variable here. Clinton has been running longer and has exponentially more money. That she’s spending some of it on 30 staffers in Iowa isn’t that interesting.

Mrs. Clinton’s advisers are most concerned that Mr. Sanders might prove effective, particularly in the Democrats’ televised debates, at painting Mrs. Clinton as squishy or untrustworthy on liberal issues.

To me, that’s the potentially interesting angle. Like Pat Buchanan in 1992 or Ted Kennedy in 1980, an eloquent firebrand can cause trouble for a more bland runaway frontrunner. In those cases, they were challenging an incumbent president deemed to moderate by the base. Here, it’s a legacy candidate with no plausible challenger. Clinton has a tendency to be thin skinned in response to criticism, so it’ll be interesting to see how she deals with attacks in debates and elsewhere from Sanders, O’Malley and company.

The crowds at Mr. Sanders’s Iowa events appeared to be different from the state’s famously finicky tire-kickers. Many said they had already made up their mind to support Mr. Sanders. They applauded his calls for higher taxes on the rich to pay for 13 million public works jobs, for decisive action on climate change and for free tuition at public colleges.

“Look at all these people,” said Phyllis Viner, 68, a yoga instructor who attended his Davenport event at St. Ambrose University.

Lindsay O’Keefe, 22, who took a picture of a Sanders poster that read, “Paid for by Bernie 2016 (not the billionaires),” called Mr. Sanders “a really valuable candidate” who can “push Hillary to the left” even if he does not defeat her.

The next day, in Muscatine, Iowa, after a rally at a community college drew twice the expected audience of 50, Mr. Sanders seemed to be experiencing a contact high from the size of his crowds. He sat on a picnic table outside for a short interview.