Reports of discrepancies in the counting of ballots in the Democratic Caucus in Iowa reveal yet again why the caucus process is outdated and ought to be abandoned. 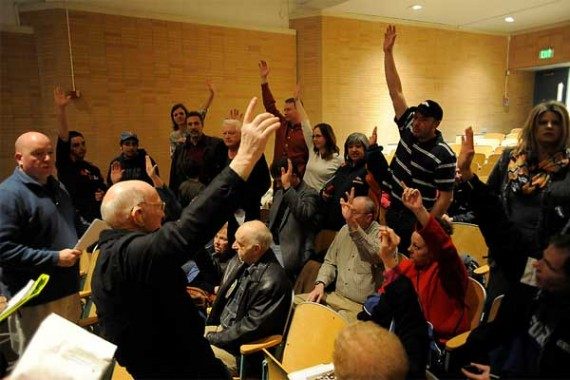 Four years ago on the night of the Iowa caucuses, Mitt Romney was declared the winner based on the preliminary results as counted by the Iowa Republican Party but it was a narrow win, showing Romney leading former Pennsylvania Senator Rick Santorum by only eight votes statewide. At the time, there were some objections from the Santorum campaign about the state party’s declaring a winner so quickly, but they didn’t press the issue and the campaign move on to New Hampshire, which Romney won easily, a win that sent him down the road that ultimately led to Romney winning the nomination. Not long after the campaign had moved on from Iowa, though, there were reports of miscounted ballot at several Republican precincts, and even ballots that went missing altogether, reports that were confirmed by mid-month. Finally, in late January the Iowa GOP declared that it was Santorum who had in fact won the caucuses, but it was largely too late at that point for Santorum to exploit the news in any way. The New Hampshire primary had past, as had the South Carolina primary, and while Santorum would not have realistically speaking won the nomination anyway, we’ll never know what impact a declaration of Santorum as the winner of the Iowa Caucuses on Caucus Night itself might have had on the race in 2012.

Now, it appears that Iowa Democrats may be having similar issues with the similarly close race between Hillary Clinton and Vermont Senator Bernie Sanders. As I noted yesterday, Clinton was the apparent winner of the caucus by an incredibly narrow margin that rivals what happened in the GOP race in 2012, a win that the Iowa Democratic Party confirmed yesterday. Today, though the Des Moines Register reports on problems with ballots on the Democratic side that may call the outcome into doubt:

It’s Iowa’s nightmare scenario revisited: An extraordinarily close count in the Iowa caucuses — and reports of chaos in precincts, website glitches and coin flips to decide county delegates — are raising questions about accuracy of the count and winner.

This time it’s the Democrats, not the Republicans.

Even as Hillary Clinton trumpeted her Iowa win in New Hampshire on Tuesday, aides for Bernie Sanders said the eyelash-thin margin raised questions and called for a review. The chairwoman of the Iowa Democratic Party rejected that notion, saying the results are final.

The situation echoes the events on the Republican side in the 2012 caucuses, when one winner (Mitt Romney, by eight votes) was named on caucus night, but a closer examination of the paperwork that reflected the head counts showed someone else pulled in more votes (Rick Santorum, by 34 votes). But some precincts were still missing entirely.

Like Republican Party officials in 2012, Democratic Party officials worked into the early morning on caucus night trying to account for results from a handful of tardy precincts.

At 2:30 a.m. Tuesday, Iowa Democratic Party Chairwoman Andy McGuire announced that Clinton had eked out a slim victory, based on results from 1,682 of 1,683 precincts.

The Iowa Democratic Party said the updated final tally of delegate equivalents for all the precincts statewide was:

That’s a 3.77-count margin between Clinton, the powerful establishment favorite who early on in the Democratic race was expected to win in a virtual coronation, and Sanders, a democratic socialist who few in Iowa knew much about a year ago.

Sanders campaign aides told the Register they’ve found some discrepancies between tallies at the precinct level and numbers that were reported to the state party. The Iowa Democratic Party determines its winner based not on a head count, like in the Republican caucuses, but on state delegate equivalents, tied to a math formula. And there was enough confusion, and untrained volunteers on Monday night, that errors may have been made.

“We feel like that there’s a very, very good chance that there is,” said Rania Batrice, a Sanders spokeswoman. “It’s not that we think anybody did anything intentionally, but human error happens.”

Team Sanders had its own app that allowed supporters and volunteers to send precinct-level results directly to the campaign. At the same time, caucus chairs sent their official results to the state party, either over a specially built Microsoft app or via phone. Sanders aides asked to sit down with the state party to review the paperwork from the precinct chairs, Batrice said.

“We just want to work with the party and get the questions that are unanswered answered,” she said.

McGuire, in an interview with the Register, said no.

“The answer is that we had all three camps in the tabulation room last night to address any grievances brought forward, and we went over any discrepancies. These are the final results,” she said.

Discrepancies can occur in official elections, and caucuses are not even official election events run by the secretary of state’s office, noted Dennis Goldford, a Drake University professor who closely studies the Iowa caucuses.

“The caucus system isn’t built to bear the weight placed on it,” he said. “There aren’t even paper ballots (in the Democratic caucuses) to use for a recount in case something doesn’t add up.”

Democrats have never released actual head counts, and McGuire said they would not be released this time, either. Determining a winner based on state delegate equivalents rather than head count is a key distinction between how the Democrats conduct their caucuses versus conducting a primary, she said. New Hampshire and Iowa are generally careful to maintain such distinctions as part of their effort to preserve their status as the first caucus state and first primary state.

In response to the ballot issues that it experienced four years ago, the Iowa Republican Party decided to supplement the traditional paper-based ballots used at individual caucus sites with technology designed to work as a double-check against the reporter paper ballot numbers and to make it easier to conduct recounts of individual precincts should that become necessary. For the most part, that system seems to have worked out quite well and the party was able to handle vote counting on Monday night quite easily notwithstanding the fact that turnout on the GOP side reached levels previously unseen for Republican caucuses in the Hawkeye State. On the Democratic side, there doesn’t appear to have been as much change to the process that the party as a whole used, although both the Clinton and Sanders campaigns apparently had their own mobile app based systems that were designed to keep track of the vote counting and, in at least some sense, act as a double check on the results provided by the state party. It’s unclear, though, whether the results reported by these system differ significantly from those that have been reported officially, or even whether there is a possibility that the outcome of the race would change based on the discrepencies reported. Given how close the margin is between Sanders and Clinton is, though, it’s not inconceivable that they could. At the very least, though, these problems are once again calling into question both Iowa’s first in the nation status and the caucus system itself when compared to traditional primaries.

Even without taking the problems that Iowa Republicans had in 2012, and the problems that Democrats there seem to be having this year, into account, caucuses have always been a flawed and problematic way to chose nominees for office. They are, as I’ve mentioned before, entirely unrepresentative because they require voters to make themselves available for hours at a time, if not longer at times that are not always convenient for those with jobs that have non-traditional hours, or families with children. Unlike a primary, one cannot vote absentee in a caucus so being unable to participate at the mandated time means that one is not able to vote at all. The result is that participation for a caucus is generally much smaller than it is for a primary or general election. In Iowa in 2012, for example, there were a reported 121,501 votes cast in the Republican caucus. By contrast, there were more than 1,500,000 votes cast in the General Election four years ago, of which Republican Mitt Romney received 730,617 votes. In other words, participation in the caucus accounted for only 16.63% of the Republican votes in the General Election. By way of contrast, in New Hampshire there were some 248,475 votes cast in the 2012 Republican primary in New Hampshire and Mitt Romney received 326,918 votes, meaning that the total primary vote was equal to 76% of the votes received by the Republican candidate in the General Election. This year, preliminary reports indicate that there were roughly 186,874 votes cast in Monday’s Republican caucuses. This is substantially more than Republicans have seen in the past, but it’s still likely that this is far below what the level of voting in a primary would be, and far less than the eventual Republican nominee will receive in November. What all of these numbers do, of course, is represent quite starkly the major problem with caucuses, which is the fact that they are highly unrepresentative of the electorate as a whole and far more likely to be subject to being hijacked by well-organized interest groups. For that reason alone, it seems obvious that primaries are preferable to caucuses when it comes to selecting a nominee that represents the views of party members and voters who consider themselves Republican or Democratic.

In addition to the fact that caucuses are highly unrepresentative, the problems that Iowa has had in 2012 and again this year show that the system itself is more subject to integrity problems and questions about the outcome of the vote. In Iowa, as in most states that use the caucus system, the process is run completely by the respective state political parties with no real intervention by state or local election officials. This means that state parties themselves are responsible for counting the vote and determining the outcome of that vote rather than government officials, and typically that means volunteers and others affiliated with the party rather than paid officials who have experience monitoring elections and counting the votes. Given that, it’s not surprising that problems like those we’ve seen the past two election cycles have occurred. Yes, it’s true that discrepancies arise in primaries and General Elections all the time, but in that case, the law provides for procedures as to how those discrepancies should be dealt with, and procedures for automatic recounts when the preliminary results are so close that even a minor human error could cause a change in the outcome of something as important as the selection of delegates to a national convention to select a major party nominee for President. For that reason alone, it’s long bast time for states like Iowa to enter the modern era and abandon an election process that doesn’t make any sense in a modern world.