There are many things to dislike about the Democratic socialist from Vermont. Hypocrisy isn't among them.

That Bernie Sanders has gotten rich from being Bernie Sanders has been the subject of quite a bit of contemplation of late. The latest installment is “The Secret of Bernie’s Millions” by POLITICO’s Michael Kruse. Its subtitle asks “How did he amass three houses and a net worth approaching at least $2 million?” and sort of answers: “The surprisingly conventional middle-class climbing of a radical-sounding socialist.”

The setup is anecdotal:

Early on in his eight years as the mayor of this city, when he typically dressed in a tieless ensemble of work boots and corduroys, Bernie Sanders one day left City Hall and found a ticket on the windshield of his rusty Volkswagen Dasher. The offense: This was the mayor’s spot, and, surely, a cop had thought, this was not the mayor’s car. But it was. It matched perfectly with both Sanders’ image as a scrappy advocate of the little guy and his own shaky financial reality. It was the beginning of the 1980s, and he was approaching 40, a single father of a not-quite-teenage son, renting a sparse second-floor apartment and having a hard time keeping up with his bills. “Not only,” he wrote on his yellow, coffee-splotched legal pads kept in archives at the University of Vermont, “do I not pay bills every month—‘What, every month?’—I am unable to …” His scribbles in barely legible cursive in the margins read like reminders and afterthoughts: “gas,” “light,” “water.”

This is perhaps not surprising. Despite a prestige education at the University of Chicago, Sanders had been a social activist mostly doing odd jobs. Election to mayor brought him an upper middle-class salary (roughly equivalent to $100,000 in today’s dollars) after just barely scraping by previously.

In the wake of his 2016 presidential run, the most lucrative thing he’s ever done, the 77-year-old self-described democratic socialist is a three-home-owning millionaire with a net worth approaching at least $2 million, taking into account his publicly outlined assets and liabilities along with the real estate he owns outright. In a strict, bottom-line sense, Sanders has become one of those rich people against whom he has so unrelentingly railed. The champion of the underclass and castigator of “the 1 percent” has found himself in the socioeconomic penthouse of his rhetorical boogeymen. This development, seen mostly as the result of big bucks brought in by the slate of books he’s put out in the past few years, predictably has elicited snarky pokes, partisan jabs and charges of hypocrisy. The millionaire socialist!

Now, “at least” does a lot of work here. Still, while “a net worth approaching at least $2 million” initially struck me as not all that impressive, especially in Washington, DC, a recent study found that $1.25 million qualified as wealthy here. Still, Sanders is nearly 80, has been in public life for four decades, and presumably has a rather healthy retirement nest egg.

Sanders has been impatient to the point of churlish when pressed about this. “I wrote a best-selling book,” he told the New York Times after he releasing the last 10 years of his tax returns. “If you write a best-selling book, you can be a millionaire, too.” Asked on Fox News if this sort of success was “the definition of capitalism,” he bristled. “You know, I have a college degree,” he said.

But, of course, the reason his book was a best-seller is that he’s a celebrity politician, not because he’s a great wordsmith. And he had a college degree when he couldn’t pay the water bill.

Based on a deeper examination of his financial disclosures, tax returns, property records in Washington and Vermont, and scarcely leafed-through scraps of his financial papers housed at the University of Vermont, Sanders’ current financial portrait is not only some stroke-of-luck windfall, it’s also the product (with the help of his wife) of decades of planning. The upward trajectory from that jalopy of his to his relative riches now—as off-brand as it is for a man who once said he had “no great desire to be rich”—is the product of years of middle-class striving, replete with credit card debt, real estate upgrades and an array of investment funds and retirement accounts.

Good. One would hope that a 77-year-old United States Senator being seriously considered for the Presidency would have the good sense to have saved for his eventual retirement. I’m a quarter century younger and don’t make a Senator’s salary and have been trying to do the same.

As an immigrant’s son who started close to the bottom and has ended up near to the top, Sanders has a narrative arc that would form the backbone of the campaign story of almost any other candidate. But it’s more complicated for him. There’s never been anybody like Sanders in the modern political history of this country—somebody who made a career out of haranguing millionaires … and who is now a millionaire himself. There is no set strategy for how to run for president as a democratic socialist with an expensive lakefront summer house. Americans generally don’t begrudge millionaires their millions—and, as Donald Trump has confirmed, the aura of wealth can serve as a useful means of self-promotion—but what to make of Sanders’ apparently conflicting narratives?

“He became the very thing he criticized others for becoming and at the same time didn’t fix any of the problems he’s been railing about that got him to this point,” Boston-based Democratic strategist Mary Anne Marsh told me.

“He almost at times sounds like he thinks it’s inherently evil to be well-off,” veteran Democratic strategist Bob Shrum said in an interview.

It’s among his most annoying qualities, frankly. But, despite having embraced the “socialist” label for decades, Sanders isn’t one. He’s advocating a European-style social welfare state, not a complete takeover of the means of production by the state.

Now, it’s true that, were Sanders’ policies in place, he’d be less wealthy. He’d have paid a much higher marginal tax rate on the windfall from his bestselling book, for instance. But I wouldn’t expect him to simply donate the money to the Treasury under extant tax policy.

I’m not a huge fan of Sanders’ politics, in terms of either ideology or tenor. And I think he’s too old for the job. But I don’t see the hypocrisy in a 77-year-old man who’s been mayor of a major city and then a US Congressman and US Senator—and thus drawing a handsome salary— over a period of nearly four decades and known for being “a cheap son-of-a-bitch” having accumulated a modicum of wealth. 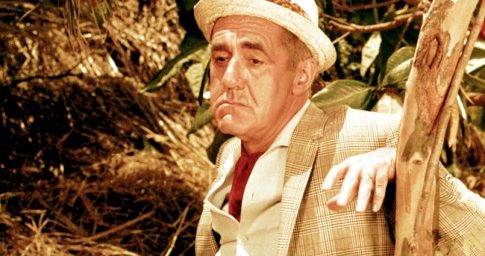