Senate Majority Leader Bill Frist, a heart surgeon by profession and widely considered to be running for president in 2008, has changed course and will now support expanded federal funding for stem cell research.

In a break with President Bush, the Senate Republican leader, Bill Frist, has decided to support a bill to expand federal financing for embryonic stem cell research, a move that could push it closer to passage and force a confrontation with the White House, which is threatening to veto the measure. Mr. Frist, a heart-lung transplant surgeon who said last month that he did not back expanding financing “at this juncture,” is expected to announce his decision Friday morning in a lengthy Senate speech. In it, he says that while he has reservations about altering Mr. Bush’s four-year-old policy, which placed strict limits on taxpayer financing for the work, he supports the bill nonetheless. “While human embryonic stem cell research is still at a very early stage, the limitations put in place in 2001 will, over time, slow our ability to bring potential new treatments for certain diseases,” Mr. Frist says, according to a text of the speech provided by his office Thursday evening. “Therefore, I believe the president’s policy should be modified.”

Mr. Frist’s move will undoubtedly change the political landscape in the debate over embryonic stem cell research, one of the thorniest moral issues to come before Congress. The chief House sponsor of the bill, Representative Michael N. Castle, Republican of Delaware, said, “His support is of huge significance.” The stem cell bill has passed the House but is stalled in the Senate, where competing measures are also under consideration. Because Mr. Frist’s colleagues look to him for advice on medical matters, his support for the bill could break the Senate logjam. It could also give undecided Republicans political license to back the legislation, which is already close to having the votes it needs to pass the Senate.

The move could also have implications for Mr. Frist’s political future. The senator is widely considered a potential candidate for the presidency in 2008, and supporting an expansion of the policy will put him at odds not only with the White House but also with Christian conservatives, whose support he will need in the race for the Republican nomination. But the decision could also help him win support among centrists.

It may well be that politics, electoral or otherwise, was not central to Frist’s thinking here. Perhaps Frist has honesty changed his mind here–or that this reflects his true views all along and that he has decided that he can no longer justify backing the Bush compromise.

Regardless, this has profound political ramifications. Frankly, this isn’t an issue that particularly energizes me. Given that abortion is both legal and widespread, it seems silly to me not to utilize the discarded embroyoes for research. On the other hand, I understand the slippery slope argument of opponents.

I haven’t studied the polls on this one but suspect most Americans support embryonic stem cell research because they believe the touted miracle cures for Parkinson’s, diabetes, and other ailments are within grasp. It may well be, though, that this is a case where the minority is much more passionate, organized, and likely to make this a key voting issue.

My guess is that Frist has little chance of getting the nomination but that he would make an interesting general election candidate. His conservative credentials are pretty weak compared to those of his likely opponents and there are several sexier “moderate” candidates out there, John McCain and Rudy Guiliani most prominent among them.

Frist is unlikely to attract the support of the most ardent pro-lifers in the Republican primaries. If, somehow, he managed to nonetheless win the nomination, though, a more centrist position on this issue would be helpful in the fall campaign against the Democratic candidate. Whether this policy change is a considered choice in light of a similar assessment on Frist’s part, I don’t know. 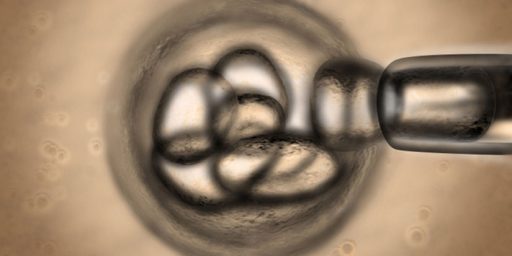