You come at the king, you best not miss. 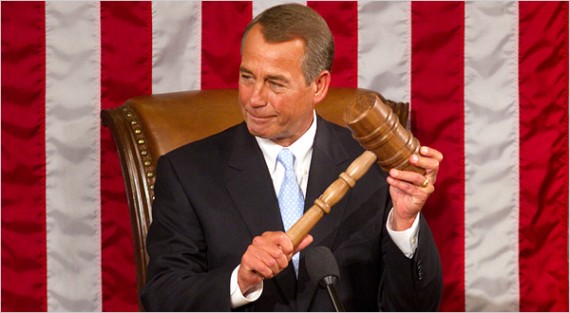 A move by insurgent Republicans to oust John Boehner from the Speakership fell laughably short. Now, it’s his move.

John Boehner is getting revenge.

After he secured his third term as speaker Tuesday afternoon, losing 25 votes on the House floor to some relative-unknown members of the Republican Conference, Boehner moved swiftly to boot two of the insurgents from the influential Rules Committee. That could be just the start of payback for the speaker’s betrayers, who might see subcommittee chairmanships and other perks fall away in the coming months.

Boehner’s allies have thirsted for this kind of action from the speaker, saying he’s let people walk all over him for too long and is too nice to people who are eager to stab him in the back. The removal of Florida Reps. Daniel Webster and Rich Nugent from Rules was meant as a clear demonstration that what Boehner and other party leaders accepted during the last Congress is no longer acceptable, not with the House’s biggest GOP majority in decades.

The reason for dethroning the two Florida Republicans was simple: Webster ran against Boehner for speaker, distributing fliers outlining his candidacy and talking about how he would better adhere to the House rules than the Ohio Republican. Nugent supported his fellow Floridian in the quixotic endeavor, which garnered the support of 12 lawmakers. Webster didn’t even give Boehner a heads-up that he was running, although leadership was aware early Tuesday morning that it could happen.

Members are already making noises about reversing any punitive action by Boehner and the leadership, although the speaker’s allies warn that further retaliation could be on the way.
The House Republican leadership is carefully reviewing the list of members who voted against the speaker and those who opposed a procedural motion in December on the so-called “crominibus,” the $1.1 trillion spending package to keep the government open through to September. Top Republican sources suggested that the process could take months to unfold.

Boehner and his team are firmly convinced that, despite 25 defections, they have a firmer grip on power than ever before. They say their “working majority” – members whom Boehner can work with – is around 220 members.

“We don’t need these fringe guys as much as we did anymore,” said a GOP leadership aide, speaking on the condition of anonymity. “We can let them walk on certain bills, and it just won’t matter. That gives us breathing room.”

While there’s plenty of room to criticize Boehner’s leadership of the caucus, the notion that he was going to be ousted after Republicans won their biggest Congressional victory since 1994 was absurd. Webster and company ignored the sage advice of Omar Little: “You come at the king, you best not miss.”

In addition to punishing stupidity, it makes perfect sense for Boehner to reward loyalists with key committee assignments, both to bolster his own power and to make it easier to pass the leadership’s agenda. And, the unnamed “leadership aide” is right: Boehner doesn’t need the fringe guys anymore. My hope is that he follows this move to its logical conclusion and treats the fringe guys as fringe guys when governing. Ignoring the people who think the last Congress was insufficiently conservative will go a long way towards strengthening the GOP’s public image.