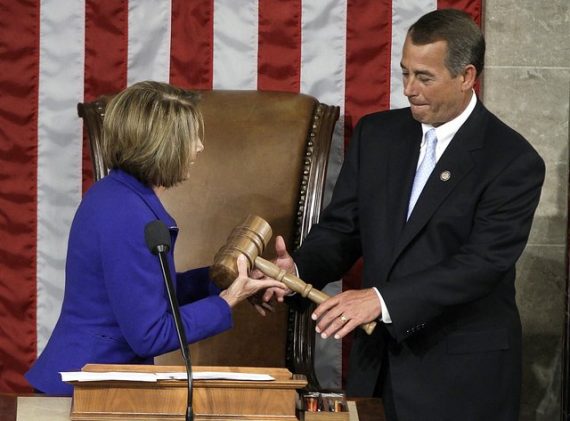 It’s been largely a day of ceremony, procedure, and overly gracious bipartisanship in Congress today marked most significantly by the ascension of John Boehner to Speaker Of The House:

The new speaker of the House, John Boehner, promised a new era of transparency in lawmaking on Wednesday, but he also pledged to aggressively push forward the conservative agenda that swept his party into power.

A roll-call vote of the chamber’s 435 members ended the way the results of November’s election determined that it would: with more votes for Mr. Boehner than for the Democratic leader, Representative Nancy Pelosi of California, making him speaker.

In remarks after taking the gavel from Ms. Pelosi, Mr. Boehner described himself as humbled, and said that the changes he envisions would restore trust to “the people’s House.”

“We will honor our Pledge to America, built through a process of listening to the people, and we will stand firm on our Constitutional principles that built our party, and built a great nation,” said Mr. Boehner, now second in line of succession to the presidency. “We will do these things, however, in a manner that restores and respects the time-honored right of the minority to an honest debate — a fair and open process.”

In the Senate, Mitch McConnell of Kentucky, the Republican leader, offered an olive branch to Harry Reid of Nevada, the Democratic majority leader, saying: “Senator Reid and I get along just fine. I expect it’ll stay that way, and I look forward to working together again.”

But he also warned Democratic senators against changing the chamber’s rules to make it harder to mount a filibuster.

“This is precisely the kind of approach a supermajority standard is meant to prevent,” he said. “It exists to preserve the Senate’s role as the one place where the voices of all the people will, in the end, be heard.”

Despite a general atmosphere of bipartisanship on the opening day of the 112th Congress, Mr. Boehner made no effort in his remarks to disguise his disgust with the way Ms. Pelosi and her Democratic majority ran the House over the past four years.

He said the rules of the House under Ms. Pelosi and previous speakers were “misconceptions” that served as the “basis for the rituals of modern Washington” — and he pledged to change them.

“There were no open rules in the House in the last Congress. In this one, there will be many,” Mr. Boehner said. “With this restored openness, however, comes a restored responsibility. You will not have the right to willfully disrupt the proceedings of the people’s House. But you will always have the right to a robust debate in open process that allows you to represent your constituents, to make your case, offer alternatives and be heard.”

Mr. Boehner referred to the complaints of his fellow Republicans that the Democrats used omnibus legislation and restricted amendments as a way of moving President Obama’s legislative agenda through the House over the wishes of the minority. Mr. Boehner said in his remarks that the House’s new rules would fix those problems — a claim that Democratic lawmakers have already challenged.

“The American people have not been well served by them,” Mr. Boehner said. “Today, mindful of the lessons of the past, we open a new chapter.”

Much like Inauguration Day, there’s much talk today about working together for the good of the country, reaching across the aisle, and giving voice to the minority.  Don’t believe any of it.