Peter Baker has unearthed a scoop of mammoth preportions: being on the White House staff is hard work.

Andrew H. Card Jr. wakes at 4:20 in the morning, shows up at the White House an hour or so later, convenes his senior staff at 7:30 and then proceeds to a blur of other meetings that do not let up until long after the sun sets. He gets home at 9 or 10 at night and sometimes fields phone calls until 11 p.m. Then he gets up and does it all over again.

Of all the reasons that President Bush is in trouble these days, not to be overlooked are inadequate REM cycles. Like chief of staff Card, many of the president’s top aides have been by his side nonstop for more than five years, not including the first campaign, recount and transition. This is a White House, according to insiders, that is physically and emotionally exhausted, battered by scandal and drained by political setbacks.

“By the time you get to year six, there’s never a break . . . and you get tired,” said Ed Rollins, who served five years in President Ronald Reagan’s White House. “There’s always a crisis. It wears you down. This has been a White House that hasn’t really had much change at all. There is a fatigue factor that builds up. You sometimes don’t see the crisis approaching. You’re not as on guard as you once were.” To Rollins, the uproar over an Arab-owned firm taking over management of some American ports represents a classic example. Bush and his staff did not know about the arrangement approved by his administration, and after congressional Republicans revolted, issued an ineffective veto threat that only exacerbated the dispute, which climaxed with the collapse of the deal last week. “This White House would not have made this mistake two years ago,” Rollins said.

I don’t doubt that Card, Rove, and the gang are tired. My suspicion, however, is that this does not account for the string of recent “setbacks.”

For one thing, the ports flap simply would not have become the type of political fiasco it did two years ago because Bush was not a lame duck president with low poll numbers. Republicans would have rallied behind them and a much greater proportion of the society would have been inclined to take his word for the fact that the deal did not pose a security threat to the nation. Moreover, it’s not as if the first four years were free of any political miscalculations.

Baker’s piece does, however, provide a good look at the brutal pace required of people who work close to the president, and not just the people whose names we recognize.

White House officials are never genuinely away from the job. Tied to their BlackBerrys and cellular telephones, they are often called to duty even during rare vacations. Weekends are often just another workday. […] While other professions demand 14-hour days and six- or seven-day weeks, few involve as much consequence, much less the intense scrutiny of the Internet age. A former Bush aide said, “You don’t really realize until you’re gone” just how exhausting it really is.

Politics is a grinding business. Most of the people at the polling firm where my wife works spend 60-70 hours a week on the job even in off years and more than that during hectic election cycles. Members of Congress and their staffs also work horrendously long hours. It’s the nature of the beast.

Decision-makers require more rest than they typically allow themselves and there are surely times when fatigue leads to weakened judgment. Still, most of the examples cited in the piece are just as likely to have been made by fresh folks. And, as White House communications director Nicolle Wallace points out, “the other side of being here six years is incredible wisdom and steadiness and experience.” 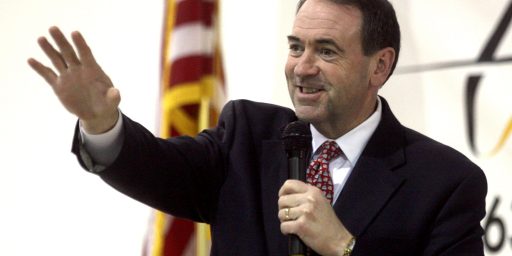