President Bush is discussing a new agreement with Baghdad that would govern the deployment of American troops in Iraq. With so many Americans adamant about bringing our forces home as soon as possible, a sentiment we strongly share, Mr. Bush must not be allowed to tie the hands of his successor and ensure the country’s continued involvement in an open-ended war.

One can certainly disagree with the specifics of the agreement and argue that it is unwise public policy. Or, one can rail against the entire concept of executive agreements, citing the Constitution’s requirement that the Senate provide advise and consent on treaty obligations. But to say that a president “must not be allowed” to exercise the powers of his office because the next guy might not like what he’s doing makes no sense.

We elect presidents to fixed terms of office. Barring unforeseen circumstances, Bush is president — with all of the powers, rights, duties, and responsibilities that come with the office — until noon on 20 January 2009. He has slightly more than a quarter of his term remaining.

For the next 368 days, then, Bush and only Bush will be making executive agreements with other countries. Is he to cease doing that because his successor might wish to adopt a different policy? At what point, precisely, does the obligation not to “tie the next president’s hands” kick in? Is it a gradual thing, or does it happen all at once?

Photo credit: Nigh Invulnerable via Google.

UPDATE: When looking for a photo earlier, I stumbled on this video at Catherine Morgan‘s site of Hillary Clinton whining at the Democratic debates about this very thing:

The idea that Congress has the power to pass legislation, which Clinton is touting and Obama backed in the debate, to force a sitting president to submit his executive agreements to Congress for approval is laughable. They’re an inherent power of presidents going back quite literally to the Washington and Jefferson administrations.

Unlike treaties, which require ratifications by two-thirds vote in the Senate, no executive agreement Bush makes would literally tie the hands of the next president. Obama, Clinton, McCain, or whoever could change the policy the moment he takes office. In reality, it’s hard to do for a variety of political reasons but that’s too bad. 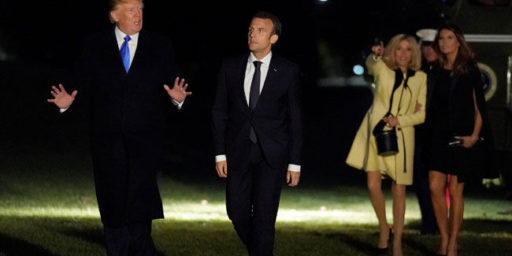