Tim Draper's fantasy will finally get a vote this November.

California’s 168-year run as a single entity, hugging the continent’s edge for hundreds of miles and sprawling east across mountains and desert, could come to an end next year — as a controversial plan to split the Golden State into three new jurisdictions qualified Tuesday for the Nov. 6 ballot.

There has been talk of splitting our nation’s largest state for years. Yesterday, voters passed an initiative to put it on the general election ballot. 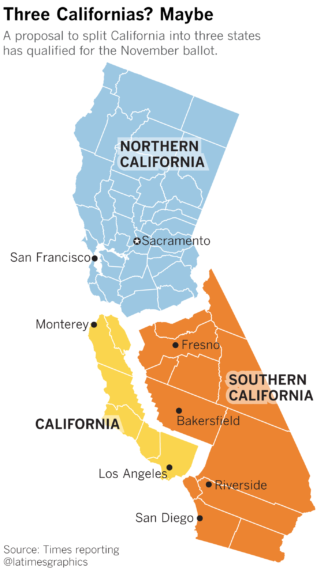 If a majority of voters who cast ballots agree, a long and contentious process would begin for three separate states to take the place of California, with one primarily centered around Los Angeles and the other two divvying up the counties to the north and south. Completion of the radical plan — far from certain, given its many hurdles at judicial, state and federal levels — would make history.

It would be the first division of an existing U.S. state since the creation of West Virginia in 1863.

“Three states will get us better infrastructure, better education and lower taxes,” Tim Draper, the Silicon Valley venture capitalist who sponsored the ballot measure, said in an email to The Times last summer when he formally submitted the proposal. “States will be more accountable to us and can cooperate and compete for citizens.”

In the initiative’s introductory passage, Draper argues that “vast parts of California are poorly served by a representative government dominated by a large number of elected representatives from a small part of our state, both geographically and economically.”

The proposal aims to invoke Article IV, Section 3 of the U.S. Constitution, the provision guiding how an existing state can be divided into new states. Draper’s plan calls for three new entities — Northern California, California and Southern California — which would roughly divide the population of the existing state into thirds.

Northern California would consist of 40 counties stretching from Oregon south to Santa Cruz County, then east to Merced and Mariposa counties. Southern California would begin with Madera County in the Central Valley and then wind its way along the existing state’s eastern and southern spine, comprising 12 counties and ultimately curving up the Pacific coast to grab San Diego and Orange counties.

A rich history of wanting to slice up California or split it off »
Under the longshot proposal, Los Angeles County would anchor the six counties that retained the name California, a state that would extend northward along the coast to Monterey County. Draper’s campaign website argues the three states would have reasonably similar household incomes and enough industries to produce their own viable economies.

It was that issue — economic sustainability — that helped fell two of Draper’s previous efforts in 2012 and 2014 to create six California states. Critics said some of the more rural regions would suffer from extraordinary rates of poverty as individual states, while coastal communities would flourish in new, smaller states where the lion’s share of California tax revenue is generated.

I’m not a California resident and haven’t studied any of the proposals sufficiently to have an opinion as to whether this or one of the other options would be preferable to maintaining a single, giant state. But there’s an argument to be made that three Californias would be more manageable than one. Additionally, since they’d likely continue to work together on most national-level issues, they’d almost certainly increase their clout in the Senate and Electoral College. Indeed, we’d likely see Presidential candidates campaign in the Californias, rather than simply treat it as a piggy bank.

But, of course, the very fact that three Californias would get six Senators rather than two and 59 Electors rather than 55 means that there would likely be opposition from other states, since their own power would be diminished.

As the LAT report notes, we haven’t split a state since West Virginia left in 1863. That was in the midst of a civil war. It’s just about inconceivable that we’ll do it under relatively normal circumstances. 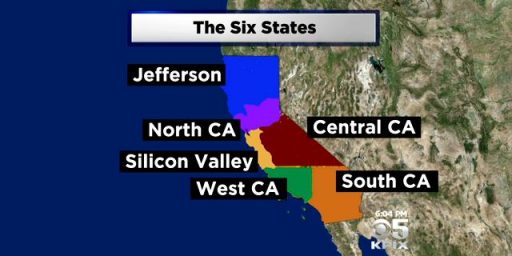