A Silicon Valley businessman says he has enough signatures to get it on the ballot, but the plan to break California up into six states is most assuredly going nowhere. 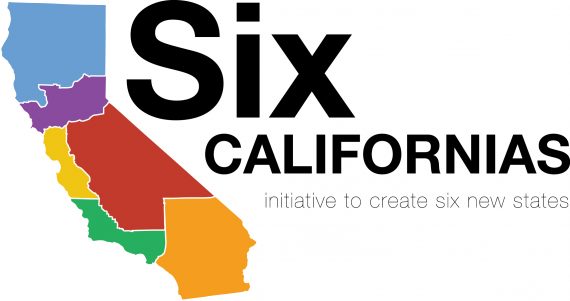 Two years from now, the residents of America’s largest state could be voting on a referendum that would break California up into six separate states:

A Twitter account belonging to the nonprofit Six Californias tweeted on Monday that “#SixCalifornias will be submitting signatures in Sacramento tomorrow for placement on the November 2016 ballot. Stay tuned for coverage!”

Roger Salazar, a spokesman for the campaign, said it’s gathered more than the approximately 808,000 signatures needed to place the measure on the ballot,Reuters reported.

Draper is a founding member of the venture capital firm Draper Fisher Jurvetsen, known for its investments in successful growth ventures such as Hotmail, Baidu, Tesla Motors and Skype. Recently, Draper won the federal government’s auction of bitcoins once owned by online drugs portal Silk Road. He’s championed the political break-up of the state for over a year, but it’s taken until recently for the plan to gain some momentum.

Draper and other supporters of the break-up argue that the state’s 38 million people would be better served by smaller governments and elected officials who would be able to work more closely with their constituents.

“If we have six Californias and we in effect dissolve the one we’ve got, those six allow us a new start,” Draper says in a video posted on the Six Californias website. Each state, which would have its own capital and legislature, would be able to write its own constitution.

The six carved out states would look like this:

The plan has met with resistance from California’s Democratic majority, and a Field Poll found 59% of Californians surveyed were against the plan, according to the San Francisco Chronicle.

This isn’t the first time that there has been a proposal to split part of California apart. Tensions between the northern and southern parts of the state are long standing and have led to the idea of splitting the state apart, although few of them have gotten as far as this one has so far. The last real attempt was in the 1940s when six counties in Northern California attempted to team up with four counties in southern Oregon to form what would have been the state of Jefferson. The effort was really little more than a populist movement, and largely fizzled out after the Japanese attacked Pearl Harbor in 1941. Drapers plan to split the state into six separate entities has its roots in previous proposals to divide the state along geographic and cultural lines, but as Philip Bump note in his examination of what six California’s might look like politically and economically, the Draper plan is really all about making Silicon Valley and San Francisco Bay area its own state, a state that would obviously have access to a vast amount of wealth and talent that the more rural parts of the state in the north and Central Valley would not. Andrew Prokop, meanwhile, notes that the plan would simultaneously create both the richest (Silicon Valley) and poorest (Central California, which is a really dumb name for a state by the way) in the country.  Indeed, as this analysis from Kathleen Miles shows, breaking California up into six states would basically go fine for Silicon Valley, North California, West California, and the area of South California around South California. The rest of the state wouldn’t fare so well. Left unaddressed in any of these discussions is the issue of how dividing the state up like this would impact the immensely important issue of the distribution of water throughout the state, and the question of just how willing the farmers of Central California are going to be to share water resources with the water-hungry areas around Los Angeles in West California. And that’s just one of the many issues that would likely come up if this plan actually came to fruition.

Before we get to the point of dealing with the consequences of breaking up California, there are a host of reasons why it likely isn’t going to happen, and why this referendum may not even make it on the ballot at all. As noted above, the most recent poll on this matter found that nearly 60% of Californians polled on the topic opposed the idea of breaking the state up as Draper proposes. Obviously, if the plan actually made it on the ballot there would likely be a huge campaign on both sides of the issue and those numbers may change, but given the fact that Silicon Valley is really the only region of the state that would benefit from the plan it seems difficult to imagine that there will be a huge groundswell of support to do something like this.  In addition to this simple practical matter, though, there are also legal barriers to the plan that make the entire idea dubious at best. Election law expert Rick Hasan, for example, noted back in December that it may not be possible to do what Draper wants to do under state law, which makes it clear  that revisions to the State Constitution cannot be the subject of a referendum, meaning that it would have to go through the state legislature. In addition to this state law issue, there is also the fact that Article IV, Section Three of the Constitution states that new states cannot be formed out of the territory of existing states without the consent of Congress and the legislature of the state in question. This language seems to make clear that a referendum would not be sufficient to carve up California in this manner and that the plan would still need to be approved by the California State Legislature, which would essentially be voting to vote itself out of existence, and by Congress. Even if the measure somehow managed to pass the legislature, which seems unlikely, it seems unlikely that Congress would approve the plan:

“This is the kind of thing that is not going to go over well, especially considering what it would mean for representation in the Senate,” said Richard Hasen, a law professor at UC Irvine. “It would multiply by six times California’s power in that body and putting aside partisan politics, it seems quite unlikely that you would get buy-in from the country to admit five new states into the union to magnify California’s power.”

So, in the end, there’s virtually no chance that there will be six Californias. Nonetheless, we may get to spend the next two years watching this issue play out.