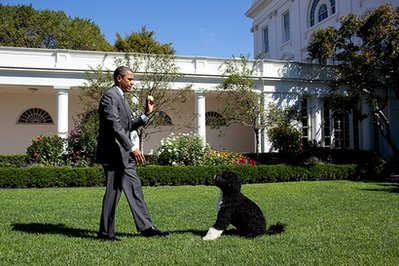 First: JazzShaw – Come on, Bo, we can do this. It’s not like we’re bowling.

Second: FormerHostage – If only voters were as well trained!

Third: Maggie Mama – Lunch with Biden or playing catch with Bo — at least that was an easy decision for the President.

Chadzilla – This isn’t the ball I threw. You corrupt bastard.

Sorry, Bo, Harry Reid is still the number one lapdog.

Does the name Pavlov ring a bell?

The Thursday Contest is already waving the flag.