Harry Reid made outlandish claims about Mitt Romney during the 2012 election. He probably knew they were lies when he made them. And he doesn't care. 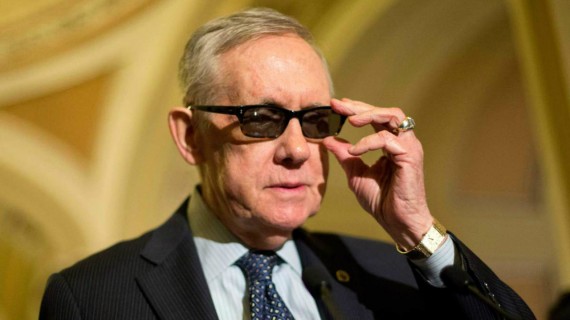 During the height of the 2012 Presidential campaign, Senate Minority Leader Harry Reid, who announced last week that he was retiring at the end of his current term, made several outlandish claims regarding Republican nominee Mitt Romney that became the focus of a media firestorm. It all began in late July of that year, when Reid claimed in an interview that a source he would not name had contacted him out of the blue and claimed that Mitt Romney had not paid any Federal income taxes at all over the previous ten years. As I noted at the time, even though Romney had not yet released his 2011 taxes or other information regarding previous tax years, the claim itself was outlandish on its face. For one thing, as one CNN Money analyst noted, it simply was not possible that anyone who might have been inclined to release information like this to Reid would have had access to Romney’s tax information for the previous decade. More importantly, the entire tale that Reid was telling sounded so utterly absurd that there was no reason to believe it was true and that either Reid was letting himself get duped by a source who was telling him what he wanted to hear, or there never really was a source at all and Reid was making the whole thing up. Despite these questions about his claims, though Reid persisted in making the arguments and it wasn’t until Romney finally released a more detailed tax report that we learned, not surprisingly, that the claims Reid was making were utterly false.

Despite the fact that it was essentially proven that Reid was lying, the Senator from Nevada tells a CNN reporter that he has no regrets:

“Romney didn’t win, did he?” Reid said in response to Bash’s question of whether he regretted what he had said about Romney.

Think about that logic for a minute. What Reid is saying is that it’s entirely immaterial whether what he said about Romney and his taxes was true. All that mattered was that Romney didn’t win.

How about with the fact that this all-means-justify-the-ends logic — assuming the end is your desired one — is absolutely toxic for politics and, more importantly, democracy.  (Worth noting: Reid is far from the only one who practices this sort of thinking; it’s the rule rather than the exception in political Washington, where winning — no matter the cost — is the only goal that matters.) If you can lie — or, at a minimum, mislead based on scant information or rumor — then anything is justified in pursuit of winning. This sort of “the winners make the rules” approach is part of the broader partisan problem facing Washington and the polarization afflicting the nation more broadly.  There is no trust between the two parties because they believe — and have some real justification for believing — that the other side will say and do literally anything to win.

Think about Reid’s statement in another context. I have two little kids.  What if I told my son, who has just started playing soccer, that his only aim was to win the game — no matter how he accomplished that goal.  After all, it’s not cheating unless someone can prove it, right?

Would anyone think that was either (a) good parenting or (b) broadly beneficial for society? No.  That is the same logic Reid is applying here, but because we are all inured to the horribleness that is modern political strategy, people barely bat an eye. No, politics ain’t beanbag. I get that. But allowing elected officials to say anything they want about people running for office — and requiring zero proof in order to report those claims — seems to be a bridge too far.

Some will accuse Cillizza of engaging in pearl clutching here, and I’m certainly no Pollyanna when it comes to politics and the lies, misrepresentations, and dirty tricks that candidates and their surrogates engage in to win elections. However, I believe he has a point here and the extent to which Reid is likely to be forgiven for what he did and, indeed, lauded by people on both sides of the aisle as his time in the Senate comes to an end is really rather extraordinary. For one thing, the fact that Reid made these accusations about Romney not at some campaign rally somewhere, but, on at least one occasion, while standing on the floor of the Senate makes the acts he engaged in seem all the more egregious. We expect our representatives so say ridiculous things at campaign rallies, but when they are speaking as legislators there should be some higher expectations that they are expected to meet and, at the very, least, they shouldn’t just be patted on the back and sent on their way when they are blatantly caught fabricating allegations about a candidate from the opposing party. As I said when this story first broke, Reid’s claims were ridiculous from the beginning. Given the nature of his investments and income, it was to be expected that Romney’s effective tax rate would be lower than other people, but Reid was claiming more than that. According to Harry Reid, Mitt Romney didn’t pay income taxes at all, and he never really made it clear whether he meant that Romney was able to tax advantage of tax laws that reduced his effective tax rate to zero, which is so close to being impossible that it was hard to believe anyway, or whether he was accusing Romney of breaking the law and just not paying taxes, an assertion that was absurd on its face. Reid’s supporters, of course, will say that he was merely passing along something a “source” told him, but given the outlandishness of the claim it’s entirely plausible that there never was a source and that Reid made the whole thing up. Reid is not an unintelligent man, after all, and if some person he didn’t know made a claim like this one would have assumed he would have tried to verify it rather than just blindly repeating it. In any case, since we learned that Reid’s claims were, in fact, false, the suspicion that he was lying the whole time is certainly not an unreasonable one. Have we really become so cynical about our political system that we’re willing to sit back and accept it when a politician makes a claim that is so obviously nonsensical? If that’s the case, then we are in far deeper trouble than I’ve previously imagined.

As he approaches his retirement in December 2016, Reid will no doubt be lauded by member of his own party, by at least some people on the other side of the aisle, and no doubt by the President of the United States. None of them will ever make mention of Reid’s obvious fabrications, the irresponsible nature of his claims, or the fact that he has no regrets for what he did. And that’s a problem.