The Christmas Cheer Edition OTB Caption ContestTM is now over.

The Christmas Cheer Edition OTB Caption ContestTM is now over. 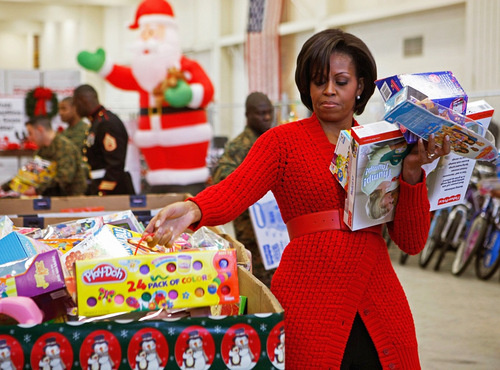 First: anjin-san – “Once I have rounded up all the toys in the stores, I will seize the means of toy production.”

Second: Alex Knapp – When asked to comment, Sarah Palin noted, “There goes those Obamas again, promoting their socialist agenda to give toys to poor kids. Why can’t those kids get a job and pay for their own toys?”

Third: floyd – Another trillion dollars worth of “Play Dough” donated to buy “Toys” for the “Tots” in congress.

JazzShaw – “How is it that I still don’t have a flunkie to do this stuff?”

Robert W. Armijo – “Now with Rahm Emanuel gone, the first lady has only three kids left back at the White House to shop for this Xmas.”

“That’s it, time for another vacation.”

The Monday Contest would like a nice Hawaiian Punch.