The Inconvenient Goof Edition OTB Caption ContestTM is now over.

Thanks for the many, many, many funny captions, some are honored below — 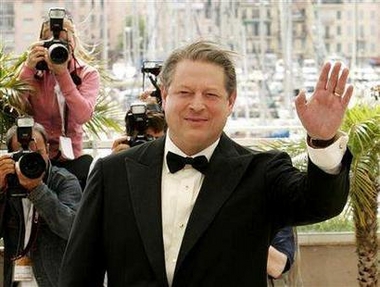 First: Stormy Dragon – Those who complained that Daniel Craig was the worst James Bond ever were to regret their actions when his replacement was announced.

Second: charles austin – Earth in the Balance, with Al Gore as counterweight.

Third: DaveD – The photographers covered every angle being unsure which side of Al was going to do the talking today.

yetanotherjohn – In a move reminiscent of recent Russian-Ukrainian political maneuverings, it has been revealed that Hillary Clinton was behind the Al Gore dioxin poisoning that caused his body to swell so much.

Dave Schuler – March of the Penguins.

radio free fred – The Return Of Underdog And Tennessee Tuxedo..

FormerHostage – One photo editor to another: “Dang! If bloggers caught the Couric photoshop there’s no way in hell we’re gonna get away with ‘fixing’ this one!”

LorgSkyegon – Al Gore announced today that his next project to stop global warming would be to go to Antarctica and live among the penguins to get a first-hand account of how their lives are changing.

I am algorax, I speak for the trees,

DRUDGEBREAKING: Today it was announced that Al Gore has secured the role of the rejuvenated stay-Puf Marshmallow Man in the third Ghostbusters movie.

Monday contest is already in the seventh inning stretch.