The Lemguins Marching Into The Sea Edition OTB Caption ContestTM is now over. 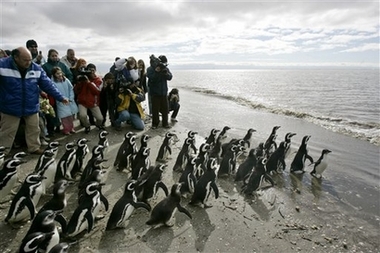 Second: Mythilt – The Disney corporation decided to go with lemmings after the first attempt at creating a mass drowning suicide failed.

Third: yetanotherjohn – Nifong conducts a lineup for a child to determine what species of animal attacked her.

Gollum – The environmentalists cheered, not knowing that merely 110 meters offshore an equally jubilant orca was awaiting the arrival of lunch.

elliot – Would you quit saying… ”It’s either sink or swim”

Lionel – “Hey, I thought this was supposed to be a formal event? I wore my tux for this?”

In yet another show of power, Charles Rangel kicks the penguins out of antarctica.

The Emperor has no clothes

“The last time I heard photographers complaining about the smell of fish this much was for the Hilton/Spears shoot.”