The Girly Men Edition OTB Caption ContestTM is now over. 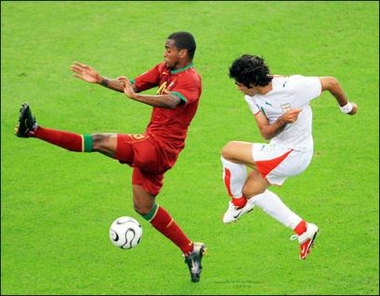 Ne Plus Ultra: bRight & Early – Translating The Village People’s YMCA into Arabic proved to be harder than anticipated.

Third(tie): McCain – Recipients of a soccer rarity, the dance card.

Alan Kellogg – “With a target that size I can’t resist.”

The Pirate – Soccer would be better, if it were Hockey.

Bithead – It was at this point the coaches knew they’d given the players too much Helium.

Oh oh! I think John Kerry is gonna be pushed down again.

Voted the Odd Sports Photo of the Week

The Thursday contest has already launched an attack on North Korea.