The Dude Where’s My Elephant Edition OTB Caption ContestTM is now over.

So many captions were submitted I thought Wizbang had moved their contest here. Hilarious. Thanks all for the laughs. Some of the best are honored below. 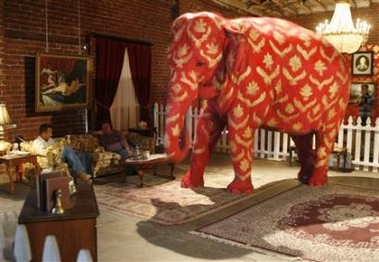 Second: Alan Kellogg – Anybody care to explain why we’re out of ink for the very large scale printer

Third: Mr. Right – “Operation Dumbo Droppings” was about to commence!

Anderson – Bush: “Some have said that there is no elephant in the room. But our resolve to defeat the elephant is undiminished.”

Rachel Edith – “Fair’s fair. Next week, we paint the donkey.”

dougrc – I don’t know Hakkim; It does make a statement, but I think I would have gone with the 50″ plasma myself…

FreakyBoy – The DNC frat loft reaches a new low in immaturity by stealing the home team’s mascot before the big game.

yetanotherjohn – If you think Hollywood is eccentric, try Bollywood.

Hodink – “I’m just saying that when he takes a dump, you, Mr. Oh-It-Will-Be-So-Hilarious, will become Mr. Martha Stewart-On-Hands-And-Knees.”

Ray – “I wonder of Al’s going to blame THIS on global warming too!”

charles austin – “This is not an elephant.” — Rene Magritte

GOP Blogging has gone a bit to the extreme, nearly as bad as cat blogging.

The Thursday contest already has sand up its crack about something.

Riding Sun is in a count down.
Sgt Hook is standing tall.