A desperation move by NBC News? 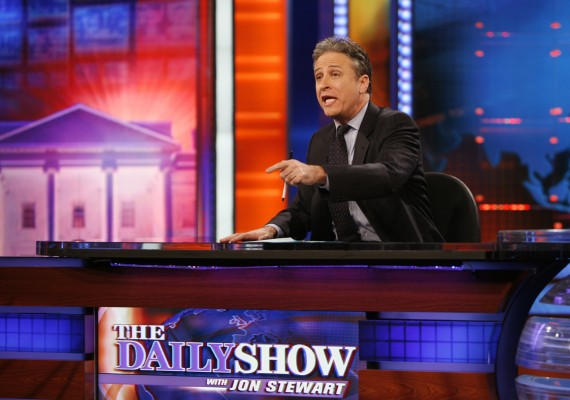 The New Yorker’s Gabriel Sherman reports that NBC tried to get Daily Show host Jon Stewart to host Meet The Press before ultimately settling on Chuck Todd as the replacement for David Gregory:

Before choosing Todd, NBC News president Deborah Turness held negotiations with Jon Stewart about hosting Meet the Press, according to three senior television sources with knowledge of the talks. One source explained that NBC was prepared to offer Stewart virtually “anything” to bring him over. “They were ready to back the Brink’s truck up,” the source said. A spokesperson for NBC declined to comment. James Dixon, Stewart’s agent, did not respond to multiple requests for comment.

It makes sense that NBC would make a run at Stewart. The comedian-cum-media-critic possesses something that broadcast executives covet: a loyal, young audience. And it’s not the first time NBC tried recruiting him. According to sources, NBC Entertainment courted Stewart several years ago for a 10 p.m. variety show (the slot ultimately went to Jay Leno). This April, CBS announced Stewart’s Comedy Central colleague Stephen Colbert will replace David Letterman next year.

Though not a traditional journalist, Stewart can be a devastatingly effective interrogator, and his Meet the Press might have made a worthy successor to Tim Russert’s no-bullshit interviews. During the home stretch of the 2012 campaign, Stewart grilled Obama for his wan presidential debate performance, asking: “Do you feel you have a stronger affirmative case for a second Barack Obama presidency or a stronger negative case for a Romney presidency?” And last October, Stewart’s clinical dissection of HHS Secretary Kathleen Sebelius laid bare the disaster of the Obamacare rollout, from which Sebelius never recovered.

On some level, I suppose that I can see NBC’s logic in eyeing Stewart to fill the anchor chair on the longest running television series in American history. The Sunday morning genre has been rather staid and, well, boring, for decades now and bringing in fresh blood like Stewart could have potentially been a game changer that would have remade the entire genre. No, we would not have seen a Sunday morning version of The Daily Show, but a Sunday show with Stewart at the helm would have likely been quite different from what we’re used to seeing and, if those shows are going to continue to exist, then maybe that would have been a good thing. Additionally, these shows tend to bring in a largely older demographic while Stewart does an excellent job of attracting younger viewers. Obviously, if they had made the move NBC would have been banking on the idea that many of The Daily Show’s younger viewers would have followed Stewart to his new gig, much like CBS is hoping that many of Stephen Colbert when he takes over for David Letterman on The Late Show next year. Personally, I’m not so sure how likely it would have been that millenials and others would have been to start watching a Sunday morning show that they weren’t watching to being with. At the very least, given their viewing habits, it doesn’t seem likely that they would have been watching it on Sunday. Looking at it from NBC’s perspective, though, it may have made sense. David Gregory’s lackluster time at the helm had left the show mired in third place, where it still currently stands notwithstanding a ratings bump during Todd’s first week on the job, and this might have been a way to change the game significantly. At the very least, Stewart would have been quite a contrast to Bob Schieffer on CBS, George Stephanopolous on ABC, Chris Wallace on Fox, and Candy Crowley on CNN.

As The Washington Post’s Erik Wemple notes, though, it’s hard to see how this would have been a good deal for Stewart:

Whatever the money on the table, it wasn’t a good enough offer for Stewart. And who can blame him? At Comedy Central, he can do comedy/commentary and occasionally lapse into journalism/commentary when he’s in the mood. He can editorialize freely, as he did to great Internet effect in denouncing Fox News coverage of the Ferguson protests. Certain Fox News commentators had resisted the framing of Ferguson as a racial issue, and Stewart just exploded. After describing an example of racial profiling experienced by a Comedy Central staffer, Stewart said, “That happens all the time, all of it. Race is there and it is a constant. You’re tired of hearing about it. Imagine how f—ing exhausting it is living it.”

Such words would never, ever fly on the set of “Meet the Press” — at least not without drawing back-channeled opposition from veteran NBC News types. If ever Stewart attempted to flex his satirical muscles on the show, he would have faced a troop of media critics coming down on him for wrecking this storied news program. How fun would that have been?

Wemple has a good point here. In many of the reactions I’ve seen to this report since it broke last night, people have pointed to several of the hard-hitting interviews that Stewart has done on The Daily Show over the years, including an interview of former HHS Secretary Kathleen Sebelius that was, arguably, more direct and forceful about the agency’s failures in setting up the PPACA exchange website than anything we saw from the “mainstream” news. Although, to be fair, Kevin Drum points out that Stewart is not as good an  interviewer as that Sebelius interview makes him out to be, and the interview segments on The Daily Show seldom get into serious detail. What makes The Daily Show, though, is the commentary on pop culture, media, and political and social issues that is disguised as direct and biting satire, usually using language that would never be allowed on Sunday morning on the flagship program of NBC’s news division. If Stewart couldn’t bring that part of his talents to the show, then what would really be the point for him? Interviewing the same guests on the same topics week after week isn’t necessarily the most interesting job in the world unless you’re a political nerd, which is one reason why Chuck Todd was a good choice to replace Gregory to begin with, but I’m not sure how interesting Stewart would find it when his own show seems like a lot more fun to do.

On a final note, I’m not sure this would have been a good move overall. Say what you will about the Sunday shows, but they are not supposed to be entertainment they are supposed to be informative. The problem that they suffer from isn’t that they aren’t more “fun” to watch, but that they keep recycling the same conventional wisdom over and over and over again week after week. Bringing in someone like Stewart to host would have either continued that formula, in which case Stewart’s particular talents would have been wasted, or it would have changed the show into something less serious, which defeats the entire point of the genre. There’s a reason, after all, that Stewart’s show is on Comedy Central and not a news network; it is, in the end, a comedy show, not a news program, and it’s probably a good idea that we maintain the difference between the two.

But what of Chuck Todd, who ultimately got the job that Stewart was apparently courted for, well, he didn’t say much yesterday, but he did have this on his Twitter feed:

If it’s Sunday, it’s your moment of zen.