A step up from The Colbert Report. 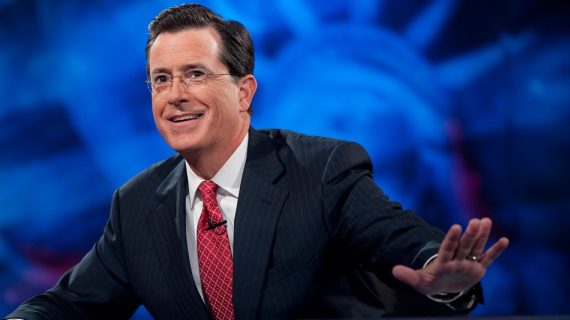 Entertainment Weekly is reporting that CBS has selected Stephen Colbert to replace David Letterman as host of The Late Show when he retires next year:

The broadcast network has tapped the 49-year-old Comedy Central host to take over the late-night franchise.

CBS has made a five-year deal with Colbert, which was announced Thursday by CBS Corp. CEO Les Moonves and CBS Entertainment chairman Nina Tassler.

“Stephen Colbert is one of the most inventive and respected forces on television,” Moonves said. “David Letterman’s legacy and accomplishments are an incredible source of pride for all of us here, and today’s announcement speaks to our commitment of upholding what he established for CBS in late night.”

“Stephen is a multi-talented and respected host, writer, producer, satirist and comedian who blazes a trail of thought-provoking conversation, humor and innovation with everything he touches,” Tassler added. “He is a presence on every stage, with interests and notable accomplishments across a wide spectrum of entertainment, politics, publishing and music. We welcome Stephen to CBS with great pride and excitement, and look forward to introducing him to our network television viewers in late night.”

“Simply being a guest on David Letterman’s show has been a highlight of my career,” Colbert said. “I never dreamed that I would follow in his footsteps, though everyone in late night follows Dave’s lead. I’m thrilled and grateful that CBS chose me. Now, if you’ll excuse me, I have to go grind a gap in my front teeth.”

As James Joyner noted last week when Letterman’s retirement was first announced, Colbert’s name quickly shot to the top of the list of possible replacements, ahead of others such as Craig Ferguson, who hosts the show that follows Letterman at the moment. It’s an interesting choice in no small part because it’s hard to predict just what kind of show we’ll be seeing at 11:30 on CBS starting in 2015. Colbert’s current show, of course is done “in character,” and one presumes that this wouldn’t be the case for a talk show that would include guests from the world of music, movies, and television. From a business point of view, it’s quite easy to see the logic behind the decision, though. Since he took over for Jay Leno, Jimmy Fallon has seen Tonight Show ratings climb higher than before, especially among that demographic groups favored by advertisers. CBS is no doubt hoping that Colbert will attract some of those same viewers thanks to the connection built up by his time as a “correspondent” on The Daily Show and as host of The Colbert Report.

Personally, I’m disappointed. I haven’t watched any of the network late night shows in years, but have been a regular viewer of both Jon Stewart’s and Colbert’s Comedy Central shows albeit typically via DVR. Since I doubt CBS is going to want Colbert to compete with himself on another network owned by the company, it looks like they’ll have to find a replacement for the slot after The Daily Show. In retrospect, perhaps they shouldn’t have let John Oliver jump ship to HBO. 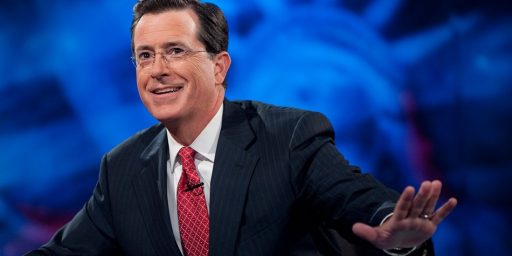