The Igneous is Bliss Edition OTB Caption ContestTM is now over.

Thanks for all the excellent captions. So long for now the OTB contests will restart in a couple of weeks. 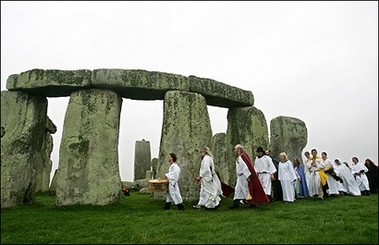 Second: FreakyBoy – Over the deafening sounds of pounding drum circles and the shrill screams of pagan squirrel sacrifices, Nigel began to realize that the “Moderate Druid,” of which he was told, might not exist.

Third(tie): bithead – Is it true that this was really a pre-historic gay bar?

Third(tie): Caliban Darklock – What the… this isn’t Mecca!

Joe Humphrey – And so the new Democratic Party takes over in the House!

Serr8d – [Fifth Girl in the line] “Ha! With all these guys, I won’t have to keep wearing white for long!”

G A Phillips – . . . and if you look very carefully at the central Sarsen stone you can just make out the image of Al Gore, who as we all know invented Stonehenge himself . . .

Mark – A new sect of liberal discovered, behold the Rockhuggers!!

“My wife told me to trim the henge, but I keep wrecking my clippers.”

My Name is Earl officially jumps the shark as Randy is beheaded for insulting the druids.

The English were in serious contention for Rock, Paper, Scissors championship.

Rodney will be visiting China and Korea for Caption Picture research for the next two weeks.