After posting an image that clearly threatened a Federal Judge, Roger Stone walked out of court with a full gag order imposed on him. It could've gone a lot worse. 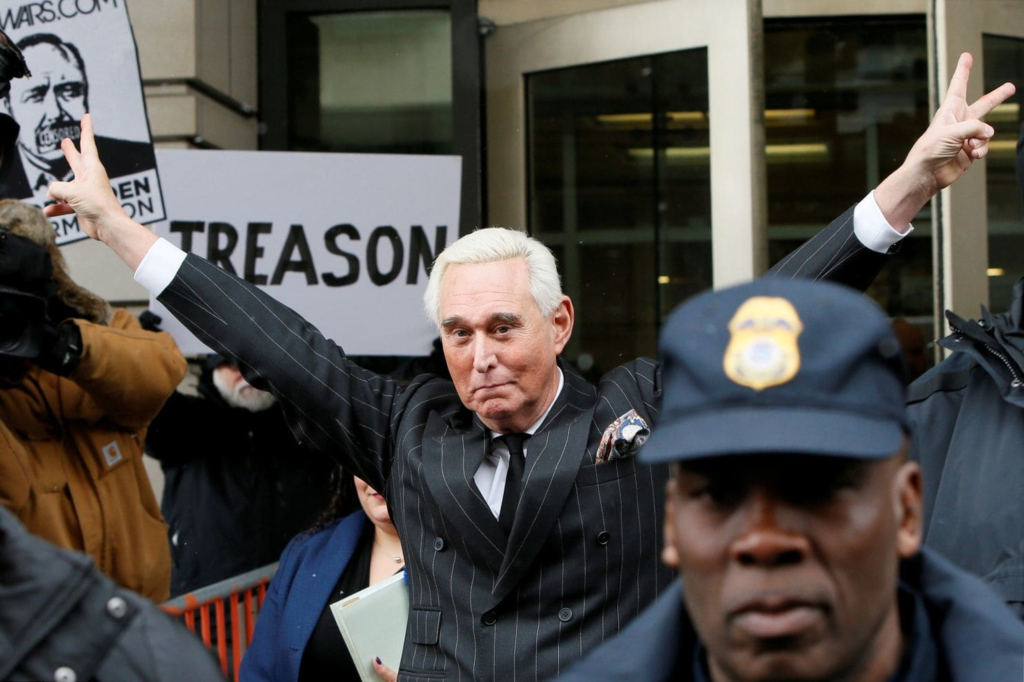 Just days after posting a graphic that appeared to threaten the U.S. District Court Judge presiding over his case on social media, Roger Stone has had a full gag order imposed on him:

WASHINGTON — A federal judge placed Roger J. Stone Jr. under a gag order on Thursday, ruling that his Instagram post of a photograph of her with cross hairs in the corner showed that he needed to be restrained from speaking and writing about his criminal case in interest of public safety.

Judge Amy Berman Jackson of the United States District Court in Washington angrily rejected Mr. Stone’s repeated apologies to her, saying that his explanations for his post were not credible. “Mr. Stone could not even keep his story straight on the stand, much less from one day to another,” she said, her voice dripping with sarcasm.

She warned Mr. Stone that any violation of the order would be grounds for her to revoke his bail.

Mr. Stone faces felony charges of obstruction of justice, witness tampering and making false statements in a case brought by the special counsel, Robert S. Mueller III. Prosecutors allege that Mr. Stone deceived the House Intelligence Committee about his efforts to contact WikiLeaks during the 2016 presidential election and that he tried to pressure another witness to lie to the committee.

The committee had been questioning Mr. Stone, a former Trump campaign adviser and longtime friend of Mr. Trump’s, about his efforts in late 2016 to find out what information WikiLeaks possessed that could prove damaging to Hillary Clinton’s campaign. WikiLeaks ultimately released tens of thousands of emails that Russian operatives had stolen from Democratic computers.

A federal judge ordered that longtime Republican operative and Trump confidant Roger Stone may not speak publicly about the investigation or case against him.

Judge Amy Berman Jackson in Washington said it would be “foolhardy” to wait for Stone to transgress again in the wake of an Instagram post that appeared to show her photo near crosshairs and suggested both she and the special counsel were biased.

“I’m not giving you another chance,” she said. “I have serious doubts whether you’ve learned any lesson at all.”

If he violates the order in any way, Jackson said, she would order him to jail.

She rejected his claim that the image was not meant to be threatening.

“Roger Stone knows full well the power of words and the power of symbols,” she said. “There’s nothing ambiguous about crosshairs.”

Stone can continue to raise funds for his defense and speak on other matters, the judge said.

Stone on Thursday took the stand to apologize for the post and ask that he be allowed to keep talking about his upcoming trial on charges brought by special counsel Robert S. Mueller III.

“I’m sorry that I abused your trust,” Stone told Jackson. “I’m heartfully sorry. . .I can only beseech you to give me a second chance.”

Stone, 66, said the “lapse of judgment was an outgrowth of the extreme stress of the situation.” He said facing criminal charges for the first time in his life has put him under severe emotional and financial strain.

Jackson was not moved. “Thank you, but the apology rings quite hollow,” she said. Based on his subsequent statements and actions, she said, “I don’t find any of the evolving and contradictory explanations credible.”

Both Jackson and prosecutor Jonathan Kravis grilled Stone on how he found the image and why he posted it. Stone gave inconsistent answers, saying first that it was posted by a volunteer and then that a volunteer sent him the image but he posted it himself. He said he can’t remember who gave him the picture or the names of everyone who has access to his phone.

How hard is it to find an image without crosshairs?” Jackson asked Stone.

“I didn’t recognize it as a crosshairs — I didn’t even notice it until it was brought to my attention by a reporter,” Stone said. He said, as he has before, that he believes it was a “Celtic cross” or “occult symbol,” based on subsequent research.

“It was improper for me to criticize at all, I recognize that,” he said.

Asked for elaboration on the symbol, he replied, “I don’t know your honor; I’m not into the occult.”

Jackson also repeatedly asked Stone why, if he immediately regretted the posting, he went on to defend it in multiple media interviews.

“I felt the media was falsely saying that I was posing a danger which was not my intention, and this was not a crosshairs in my opinion,” Stone responded. “I had no malicious intention.”

Stone is already under a limited gag imposed by Jackson after being accused of lying about his efforts in 2016 to gather information concerning hacked Democratic Party emails. A caption on the Instagram post of Jackson said Stone faced a “show trial” in her courtroom after his indictment stemming from the special counsel investigation of Russian interference in the 2016 election.

Defense attorney Bruce Rogow called the post “a single specific instance” and argued that “Mr. Stone should have another opportunity to comply” with the judge’s order.

As things stand, Stone got off relatively lightly under the circumstances notwithstanding the fact that Judge Jackson wanted to send him a message that any future comments that appeared to be threatening or which violated the terms of the amended gag order would result in further and more severe restrictions. Theoretically, the Judge could have imposed a complete gag order on Stone that would have prevented him from talking at all even on topics unrelated to the case, or she could have sent him to jail, which of course is what happened to Paul Manafort after it was revealed that he was engaging in witness tampering while out on bail in the two cases pending against him in Virginia and the District of Columbia. In that sense, Stone was lucky that he got off as easy as he did. In any case, Stone got off rather easily here. Let’s see if he manages to stay within the bounds of proper behavior or if he screws up again and ends up in jail.