The Binge and Purge Edition OTB Caption ContestTM is now over. 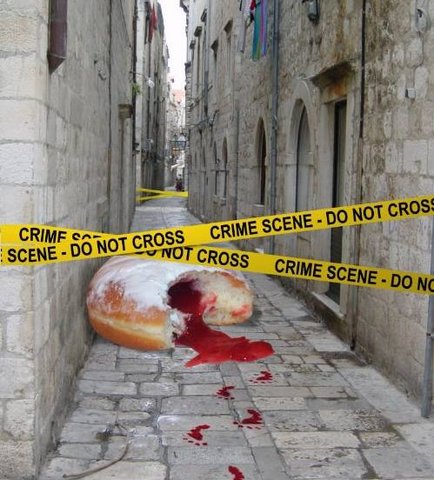 First: McGehee – New evidence surfaces which suggests the Warren Commission may have concluded wrongly after all.

Second: FormerHostage – An anonymous detective was quoted as saying, “This is almost as bad as that cereal killer we had last year.”

Third(tie): Gollum – After viewing the crime scene, Nifong rounded up the entire Duke women’s rugby team for a “lineup.”

Third(tie): elliot – Preliminary reports from local police indicate that the BOSTON CREME STRANGLER has struck again, only this time he picked the wrong victim and apparenty ran off when he realized it was JELLY.

FreakyBoy – The Police would not comment on their ongoing internal investigation.

charles austin – How come the tape says do not cross and then they cross them? Is that anything like crossing the streams in Ghostbusters?

Ennuipundit – Police have an APB out for Homer J. Simpson, the alleged assailant. The giant jelly doughnut’s family has requested police protection and is in seclusion.

Wineaholic – OJ found the real killer, and he was delicious.

When Transfats are outlawed, only outlaws will have Transfats.

Now we know how all that junk got in that trunk.

In protest for their cartoons with the image of the prophet Mohammad, Islamic extremists extract revenge against the danish.

Randall Simon’s aggression towards foods escalated to include pastries and desserts.

It was apparent that Zaphod had been flying the Heart of Gold again.

Thursday Contest is already flapping in the breeze.