The Gaza Strippers Edition OTB Caption ContestTM is now over. 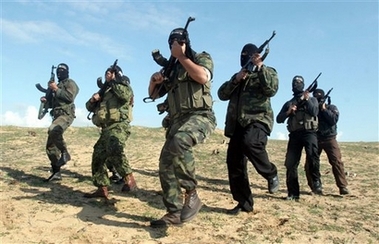 First: Timmer – “Ms Spears? Put DOWN the umbrella and the clippers and come with us please.”

Second: Maggie – Supporters of the Pelosi-Murtha Iraq policy gather outside Fallujah for a rally.

Third:(tie) charles austin – These Fatah members were getting rather tired of being lectured by Al Gore about lowering their carbine emissions.

yetanotherjohn – Today on Bowling for Terrorists…

elliot – Okay men we’ve got 24 hrs liberty, hurry before all the good camels are taken.

Gollum – “Last one to the goat pen’s a rotten infidel!”

Can you find the Democrat Presidential hopeful hidden in this picture?

In just 0.15 seconds after the conflict began, France surrenders.

In the islamic remake of the musical “Grease,” A fatwa was issued that the Thunderbird was a holy symbol and Sandra was summarily beheaded.

Monday Contest is already getting a charge out of it.