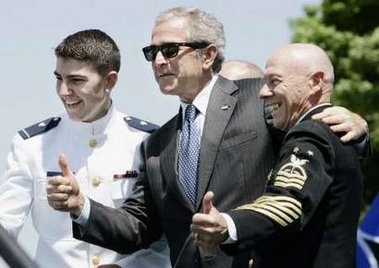 Second: Mister Biggs – “It’s 106 miles to Chicago, we got a full tank of gas, half a pack of cigarettes, it’s dark, and we’re wearing sunglasses.”

Third: CowBoy Blob – We’re on a Mission from God.

brainy435 – Wait a minute… which one of us will be flying the cargo plane out of Hong Cong?

yetanotherjohn – Bush stated that if you thought his administration had been spending money like a drunken sailor before, you haven’t seen anything yet.

“Hey there Chief, wanna be a rear admiral, if ya know what I mean?”

“Hey Pres, Let’s say we head down to the Blue Oyster after this photo Op.”

has already hit the highway.