The Smell Our Dairy Air Edition OTB Caption ContestTM is now over. Second: charles austin – No one was amused that Phil used three fake teats.

yetanotherjohn – Democrats found that the larger than expected Iowa caucus turn out seemed to be from voters with a particular beef.

chris – All the moo’s that’s fit to print

Deathlok – Man in back(not seen): Slow down on Clowning!! Stop The Clowning!! What?!? Damn! I got the wrong costume.

markm – “In what some believe is a possible sign of Armageddon…bipedal cloned cows mixed with Dell brand bipedal cows AND the bipedal cows from those California Milk Producers commercials..when asked about the intergrazing, one cow was herd to say “well, we’ll just have to let the chips fall where they may””

elliot – Cow with the ‘Got Milk?’ sign in front: “Hey you, I hope that’s a fake teat you’re poking me with back there.”

Looks we really stepped in it this time.

‘Teats not reTreats,’ was the conservative response to ‘Breasts not Bombs.’

Thursday Contest is already anticipating a turnover in the polls. 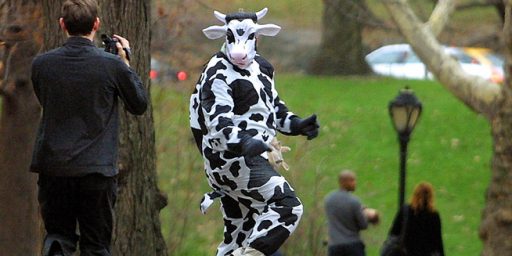 There’s No Substitute for Inspections