The Waiting For Godot Edition OTB Caption ContestTM is now over. First: Maggie Mama – No, Charlie Brown, they’re not waiting for the Great Pumpkin; they await The Messiah.

Second: Floyd – If you think you can pass them off as our best and brightest, you’re out of your gourd!

Bithead – What America didn’t know was who it was who actually made use of those falsified voter registrations from ACORN.

Floyd – Quick douse your lighters! It’s not the “Dead”…… IT”S A “SMASHING PUMPKINS”CONCERT!!!

elliot – Great Bob, you’ve lit all the pumpkins in 5 hours and 45 mins. Now you can blow them out.

anjin-san – Obam-ho-tep… Obam-ho-tep…(I would’ve made if first place, but I came up with it. — rodney dill)

As a child, Obama’s Pumpkin patch had sincerity as far as the eye could see, as an adult, not so much.

Another community organizer who is outstanding in his field.

Monday Contest is trying to get on the Telly. 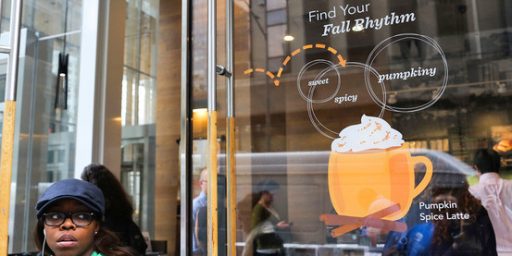 Way Too Excited About Coffee With Pumpkin Syrup in It