The Southpaw Edition OTB Caption ContestTM is now over.

These were so funny, everyone wins . . . Just joking. 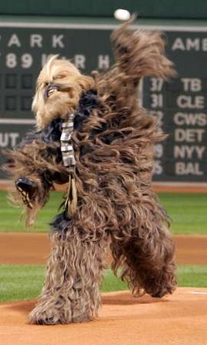 First: LJD – “NO! I said bring in the ROOKIE pitcher!”

Second: Jim – As the owners, players union, and congress debate what should be done about steroid use, evidence continued to pile up that a problem does exist.

Third: Kenny – Hokey religions and ancient weapons are no match for a leftie with a curveball, kid.

bullwinkle – Filming has started on the latest Star Wars movie, Empire Strikes Out.

DL – I warned Bush he needed to tighten the borders,but would he listen?

Mythilt – Remember, if you donÃ¢€™t strike out. . .the wookie tears your arms off.

Rob M – Being Strong on defense and empathetic to minorities made him a tough candidate but his ability to not look like a dork playing sports made him the best Democratic Presidential Candidate in years.

bithead – At least we’ve got him THROWING the ball, now. A few hours ago, he was EATING the things.

bithead’s Rodney’s Bottom of The Barrel

bithead’s the designated hitter for the Bottom of the Barrel for this week-ends contest. I’m a little captioned out from competing with the prolific Will vehrs on the Commonwealth Conservative’s caption contest. I submitted around 25 captions, but I think Vehrs has over 80.

May the fur(s) be with you

While playing for the farm team in Oklahoma, he once got into an argument with a news reporter who called him the furry with a fringe on top.

They say at his wedding, “Groom” was a VERB, not a NOUN.

I know, but even after a few drinks, she doesn’t look any better at all…

…He’s the hairy-handed gent who ran amuck in Kent….

The Monday contest has already been started.