Some excellent entries this week. The winners: 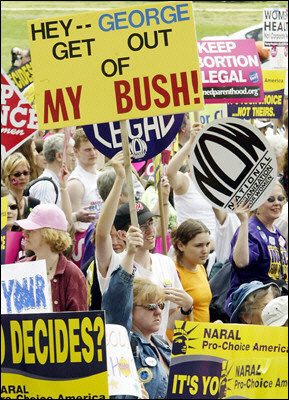 1st: Rodney Dill – Emily did not realize how close to a solution to the abortion conflict she had inadvertantly come. If only she had chosen to keep Dick out of her Bush, instead of George, there would have been no need for a further choice.

2nd: Cassandra – Proudly, Muffy waved her sign aloft. That expensive English Lit degree from Tufts had allowed her to express her views with an grace and economy of expression that did credit to her gender.

3rd: Pile On – At a recent pro-abortion march in Washington D.C. one protester expresses her deep seated rage at her bush being neither selected or elected.