The Rebrand Democrat Edition OTB Caption ContestTM is now over. 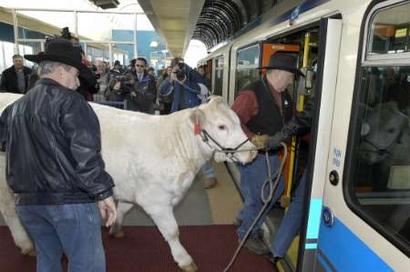 Second: AlphaPatriot – Democrats from all over the country respond to a call for a new party mascot, bringing beloved pets to Washington as the party tries to remake their image.

Third: RightWingDuck – “President Bush and Staff present their gift to the survivors of the tsunami. This one Ã¢€” a present for the Ambassador of India. Finally, no more gaffes.”

Hodink – Paying a visit to the home of Condi Rice, Dubya Bush brings along a few of his favorite things.

Crerar – Gus and Claribelle Fornicher catch a train to start their honeymoon on the eve of Canada enacting increasingly liberal marriage laws.

Bithead – And in offices throughout southern Manhattan for the remainder of the day, people were asking the question: “Do you smell something”?

Chrees – You’d be a “mad cow” too if you had to take public transportation all the time.

“Not to be outdone in shenanigans some distraught Packer fans set off to pay Randy Moss a visit.”

The Monday contest has already started.