The Dean Screamometer Edition OTB Caption ContestTM is now over. 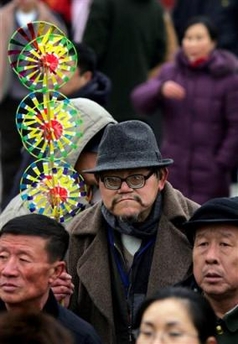 Turned out to be a tough picture to caption, but there were some creative attempts

Second: The Man – Inside workings of the Google.cn search engine

Third: McCain – A Danish newspaper depicts the prophet Muhammad in a bad hat.

McGehee – Joliet Jake Blues is alive and well and living in Hong Kong.

legion – Never quite the same after his encounter with Agent 007, Oddjob now sells discount Rolecks watches in Tienanmen Square.

Bithead – Ping finally realized his homeland was all a communist plot.

Bithead – Hong… the first day after being released from Prison, after serving 20 years for being a Peking Tom

’tis an ill wind that blows no good.

Ching-Li hoped no one spotted his protest t-shirt, with the number of people killed at tiananmen square, until the appropriate time.

The Monday contest is already glowing with radioactivity pride.