The Wearing Your Heart on Your Sleeve Boob Edition OTB Caption ContestTM is now over. 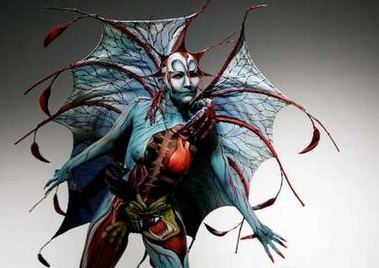 Third: Maggie – In order to fight against the threat of bio-terrorism, Nanosight Ltd., UK, is working to develop a revolutionary new method of creating artificial antibodies that could offer the best early warning indicator of biological attack. Unfortunately, scientists became extremely discouraged when their first attempt at an artifical antibody looked like Nancy Pelosi.

Scott_T – There was no slowing down Mardi Gras costumes this year! Katrina seems to of inspired many “Blue and Windy” costumes.

The Man – Bjork went conservative at the Oscars this year

McCain – God invented beer so that they all look cute around closing time.

LJD – Whatever it is, it’s got a great rack!

Hermoine – Musta been the genetic engineering in her fruits and vegetables.