The Merrill Lynch Edition OTB Caption ContestTM is now over. 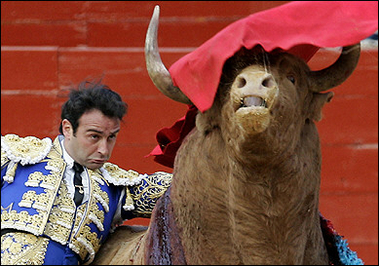 Second: SgtFluffy – Ferdinand was never the same after this…

Third: DaveD – The “Mad Cow” cover up was not going all that well.

Adjustah – Seriously, could Dancing With The Stars get any worse?

FormerHostage – This “Queer Eye” franchise has jumped the shark!

Elmo – Mooo for me baby.

No one could court the stock market like Greenspan

The Monday contest is already outperforming the Nairobi Trio.

Other Contests running this week
Riding Sun is on the road, doing some undercover work.
OTB Hollywood is still putting on the Dog.