People are flocking to Sacramento’s Vietnamese Catholic Martyrs Church to see a stain on a statue of the Virgin Mary.

Carrying rosary beads and cameras, the faithful have been coming in a steady stream to a church on the outskirts of Sacramento for a glimpse of what some are calling a miracle: A statue of the Virgin Mary they say has begun crying a substance that looks like blood. It was first noticed more than a week ago, when a priest at the Vietnamese Catholic Martyrs Church spotted a stain on the statue’s face and wiped it away. Before Mass on Nov. 20, people again noticed a reddish substance near the eyes of the white concrete statue outside the small church, said Ky Truong, 56, a parishioner.

Since then, Truong said he has been at the church day and night, so emotional he can’t even work. He believes the tears are a sign. “There’s a big event in the future Ã¢€” earthquake, flood, a disease,” Truong said. “We’re very sad.”

On Saturday, tables in front of the fenced-in statue were jammed with potted plants, bouquets of roses and candles. Some people prayed silently, while others sang hymns and hugged their children. An elderly woman in a wheelchair wept near the front of the crowd. A red trail could be seen from the side of the statue’s left eye to about halfway down the robe of concrete. “I think that it’s incredible. It’s a miracle. Why is she doing it? Is it something bothering her?” asked Maria Vasquez, 35, who drove with her parents and three children from Stockton, about 50 miles south of Sacramento.

Thousands of such incidents are reported around the world each year, though many turn out to be hoaxes or natural phenomena.

Many? How about all?

It astounds me that so many people in the developed world are so starved for supernatural help that they are willing to spend hours worshipping stains on walls, shadows, and other odd phenomena.

Even granting that religious belief requires some degree of faith, this goes against the basic ideals of Christian theology. For one thing, this would seem to violate the Second Commandment:

Thou shalt not make unto thee any graven image, or any likeness of any thing that is in heaven above, or that is in the earth beneath, or that is in the water under the earth: Thou shalt not bow down thyself to them, nor serve them: for I the Lord thy God am a jealous God, visiting the iniquity of the fathers upon the children unto the third and fourth generation of them that hate me; And shewing mercy unto thousands of them that love me, and keep my commandments. (Exodus 20:4-6)

More significantly, none of the major religions are about bowing before statues but rather transforming people’s lives. The Catholic Church is (or at least should be) focused on teaching and reinforcing certain ethical norms, doing good works, providing spiritual counsel, and the like. The idea that people should spend their days praying to stained statues is absurd. 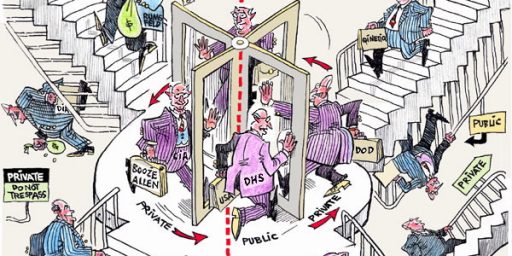 Regulatory Capture and the Revolving Door