Charlie Sheen was the highest paid sitcom actor on the planet. Until a few minutes ago: 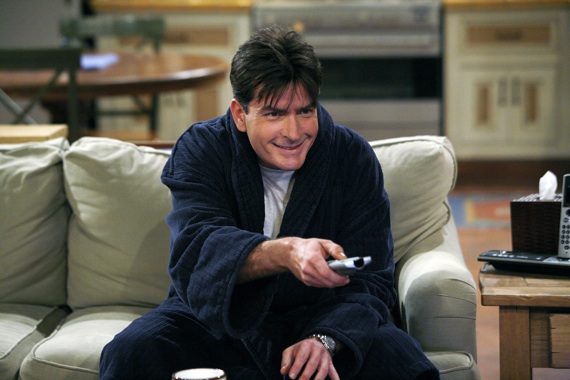 Charlie Sheen was the highest paid sitcom actor on the planet. Until a few minutes ago:

Charlie Sheen was fired Monday from “Two and a Half Men” by Warner Bros. Television following repeated misbehavior and weeks of the actor’s angry, often-manic media campaign against his studio bosses.

The was taken after “careful consideration” and is effective immediately, the studio said in a statement. No decision has been made on the show’s future without its star, said Paul McGuire, a Warner spokesman.

The actor, who has used TV, radio and social media to create a big megaphone for himself, was not silent for long.

In a text to The Associated Press, Sheen responded, with the F-word and “They lose,” followed by the word “Trolls.” Asked if he planned to sue, Sheen texted back, “Big.” As for his next move, Sheen texted, “A big one.”

Who could have possibly seen this coming?

Actually, many of us. During some speculation about this inevitability on Twitter last week, someone mentioned the “Valerie’s Family/Hogan’s Family” scenario from years ago, wherein the star, Valerie Harper, was replaced by Sandy Duncan. I suggested that Duncan be hired to replace Sheen.

More seriously, I thought it would be cool if they hired Michael J. Fox. Sheen replaced him some years back on “Spin City.”