Chart Of The Day: The Housing Bubble Has Not Fully Deflated

The housing market that existed from the late 1990s until 2007/08 was an historical anomaly, and anyone expecting a return to those days is fooling themselves.

Daniel Indiviglio at The Atlantic comments on this chart of housing prices going all the way back to 1890: 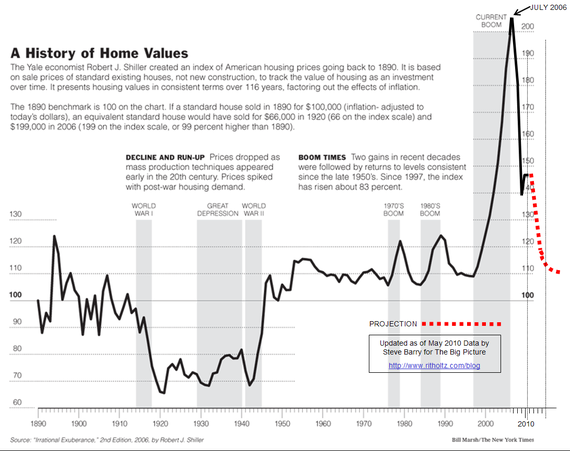 This is a pretty fascinating picture. First, it shows just how incredibly absurd the housing boom was. Beginning in the 1940s, inflation-adjusted homes prices have settled around the 110 value according to the Case-Shiller index. Yet, the index value exceeded 200 in 2006. Prices began a descent when housing collapsed, but as of May the index remained well above the natural value of 110.

Eyeing the chart, the value looks to have hit around 147 in May. For it to drop back down to 110, home prices would have to decline another 25%. That’s still a pretty long way to fall.

Indeed, and as Indiviglio notes the drop need not be an actual drop in price of 25% since inflation, along with stable housing prices, would help to bring the real cost of housing back down to historic levels. What this chart does show us, though, is that the housing market that existed from the late 1990s until 2007/08 was an historical anomaly, and anyone expecting a return to those days is fooling themselves.