The last time the Cubs were in the World Series, World War II had just ended. Now, they have a chance to break one of the longest droughts in sports history. 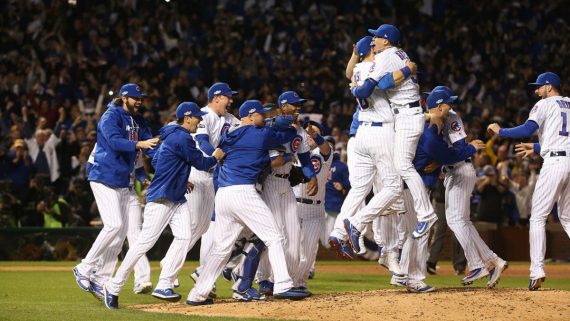 The last time the Chicago Cubs were in the World Series was just a few months after the end of World War II, a series they lost four games to three to the Detroit Tigers. The last time they won the World Series was six years before the start of World War One in a world where the British Empire still controlled much of the world, the Russian, German, Austro-Hungarian Empires still existed, mass-marketed sliced bread was still twenty years away, and the Model T Ford had just entered production. Ever since then, the Cubs have stood as the symbol of eternal fan disappointment. Many attributed this to the famous Billy Goat Curse allegedly put on the team by a man who was kicked out of Wrigley Field when he attempted to bring his Billy Goat as a guest. Whatever the reason, the team came close many times over the year, only to fall short for one reason or another that many refused to put to coincidence or the fact that team ownership, which for years was in the hands of the company that owned the Chicago Tribune and other media outlets, was unwilling to invest the money necessary to build a winning team. The curse was such that it was even the butt of a joke in Back To The Future II which had the Cubs winning the World Series, a possibility prevented last year by the fact that the, as they had in 1969, the Cubs found themselves blocked by the New York Mets. It was enough to make even the most rational baseball fan wonder if maybe there wasn’t something supernatural behind the Cubs’ plight. Until last night:

CHICAGO — He stood on the grass in shallow left field, bathed in the glow of the lights above Waveland Avenue. Half a century ago, on sunny afternoons at Wrigley — only afternoons, back then — he would have swooped in for racing catches on that very spot. He might have met a smiling Ernie Banks and Ron Santo on his way back to the dugout.

Now Billy Williams is 78, and Banks and Santo, his Hall of Fame teammates, are gone. He thought about his old friends in the ninth inning Saturday night, the moment Addison Russell scooped a ground ball to start a double play and send the Chicago Cubs to the World Series.

“I played with Ronnie a long time ago; we started in Double-A together, and Ernie was here,” Williams said. “We came up to the big leagues to help Ernie try to win a pennant, and we didn’t get a chance to do that. And I thought about them, but they’re somewhere celebrating now.”

The Cubs raised a toast to their friendly ghosts after Game 6 of the National League Championship Series. They banished their others, those mythical miscreants who had tortured them for decades and kept so many proud baseball men from tasting the World Series.

For the first time since 1945, the Cubs are there, matched in Game 1 on Tuesday with a Cleveland Indians franchise that has not won the title since 1948. The Cubs’ championship drought is 40 years longer, and winning it all, of course, is the goal. But the players know, deep down, that the other side wants to win just as badly. What they really crave is the chance to compete on the brightest stage. Now it is here — at last.

“It means more to win here, with Billy Williams on the field, and Santo’s family here, and Ryne Sandberg in the stands,” said Theo Epstein, the Cubs’ president of baseball operations. “That makes it resonate more with us, but no one’s weighed down by it. It’s not a burden. Everyone in this organization’s here to be part of this.”

Epstein is now, officially, the ultimate curse-breaker in baseball history. He presided over the 2004 Boston Red Sox, guiding his hometown team to its first championship in 86 years, then won again soon after. When things went sour in Boston, he came here, stripped down the roster, and built a pennant winner within five years.

Under Epstein, the Cubs traded for some future stars and drafted others. They groomed some existing prospects, like second baseman Javier Baez and catcher Willson Contreras, and acted boldly in free agency. The Cubs spent $155 million on Jon Lester, who shared the series’ Most Valuable Player Award with Baez and came here because Epstein believed in the Cubs’ future.

“He spoke so highly of these guys, and I’ve known Theo for a long time, and I knew whatever he said was the truth,” said Lester, the former Boston ace. “We’ve all seen uber-prospects that don’t make it. But never once did that cross my mind about these guys. The way Theo talked about them, the way he went about his business — I know Theo, I know what he means, I know what he stands for. I’m just happy he picked me to be a part of this.”

Tom Ricketts, the owner who met his wife in the Wrigley Field bleachers, said his young daughter cried tears of joy after the final double play. She was not yet born when the Cubs kicked away pennants in 1984 and 2003. This is a new time, and a new team. To Ricketts, even the older fans could sense it.

“You know what?” he said. “Walking through the upper deck tonight, high-fiving people — nobody was worried. Everybody was confident. People really believe in this team.”

And why not? The Cubs’ rotation is so deep that a 15-game winner, Jason Hammel, could not even crack the playoff roster. Beyond Lester, there are Jake Arrieta, John Lackey and Kyle Hendricks, the National League leader in earned run average, who easily outpitched Clayton Kershaw in Game 6, allowing just two singles in seven and a third shutout innings.

Aroldis Chapman, who throws the hardest fastball ever recorded, is the closer. The offense, led by Kris Bryant and Anthony Rizzo, outscored opponents by 252 runs in the regular season. The defense turns more balls into outs than any other team in the last 25 years.

“You saw all the ingredients tonight, things that have made us good when we’ve played well, which we have for most of the year,” Epstein said after Game 6. “Great starting pitching, a terrific approach at the plate, grinding, working counts, using the whole field, excellent defense and then a bullpen coming in to close it out.”

“I was glad we played so well in our biggest game of the year,” he added. “That’s really fitting for this type of club. This is our 110th win of the year. It’s not an accident. These guys are really good, and I’m proud of them.”

Why were these Cubs the team that did it, the one that finally broke through to the World Series? The answer is simple: because they were the best. At 103-58, the Cubs had their highest winning percentage (.640) in 81 years.

The best team does not always reach the World Series, of course, and the Cubs had to knock out the San Francisco Giants, who have won three titles this decade, and the Dodgers, who have the game’s best pitcher in Kershaw. The Cubs did so, in both series, with a game to spare.

“You know what was funny?” center fielder Dexter Fowler said. “We saw Cleveland win in Toronto in the clubhouse and everybody was quiet. And I just yelled, ‘We on deck!’ Everybody turned up after that. There was really no doubt.”

As noted, the Cubs victory isn’t merely a fluke, it’s the result of several years of rebuilding by Theo Epstein and the managerial skills of Joe Maddon, who had guided the Tampa Bay Devil Rays to the 2008 World Series. Together with a management team that actually seemed to care this time, they managed to put together a team built to win and to win big, and that’s exactly what happened, Last year, they came close only to lose out to the Mets in the National League Championship Series, but this year there was seemingly no stopping the Cubs, From the beginning of the season until now, the Cubs have indisputably been the best team in baseball, and they’re built in a way that suggests they could remain competitive for several more years at least.

In addition to being the first time that the Cubs have won the National League Pennant since 1945, it also marked the first time that the team had won a postseason series at home. When the team won the World Series in 1908 and 1907, it happened on the road in Detroit. So this was no doubt an extra special win for long-suffering Cubs fans all over Chicago.  The Cubs victory is, perhaps understandably, overshadowing the fact that they will be playing the Cleveland Indians, who have been in the World Series twice in the last twenty years, in 1995 and 1997, but haven’t won it all since 1948, but in the end this will be a World Series of underdogs on both sides, which is perhaps appropriate in the end. Whichever team wins will be breaking a long, long streak of losing, but something tells me most baseball fans will be rooting for the Cubs.