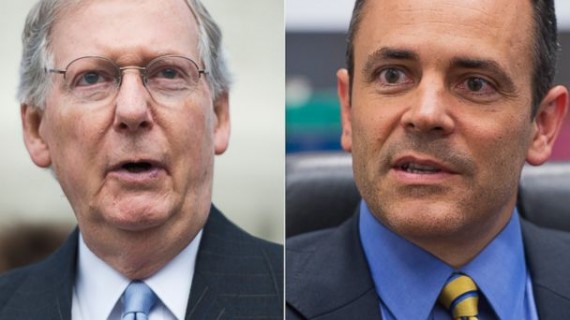 The primary election in Kentucky pitting Senate Majority Leader Mitch McConnell against Tea Party favorite Matt Bevin is just under a month away and, somehow, cockfighting has become the biggest issue in the election:

Yes, cockfighting. It’s the dominant issue at the moment in the Republican primary for U.S. Senate in Kentucky. Bevin’s remarks a recent rally where attendees championed the legalization of the blood sport — illegal in Kentucky — in which roosters fight one another and spectators bet on the outcome have become the latest blow to his floundering campaign to unseat the Senate’s top Republican.

It all started with the revelation early this month that Bevin spoke at a pro-cockfighting rally in Corbin, a town in southeastern Kentucky, on March 29. Bevin later said he didn’t understand that he was at an event to rally support to legalize cockfighting.

“I was the first person to speak and then I left,” Bevin told the Corbin News Journal. “They knew I was here. They asked if I would be interested in speaking. I’m a politician running statewide, any chance I get to speak to a few hundred people I’m going to take it.” His now-former spokeswoman told the Louisville Courier-Journal, ”It was not a cockfighting rally, it was a states’ rights rally.”

The story lingered in the local media for a bit, then faded. But it resurfaced in aThursday WAVE TV report which detailed Bevin’s remarks at the March event, which included a response to a direct question about cockfighting. The report also included evidence that there was little ambiguity about the purpose of the gathering.

American Gamefowl Defense Director Dave Devereaux spoke before Bevin, reported WAVE’s John Boel, who attended the rally undercover. Devereaux explained the gathering was for “the sole purpose of legalizing gamecock fighting at the state level.” After Bevin spoke, Devreaux asked him if he would “support the effort to legalize gamecock fighting in the state of Kentucky.”

Bevin responded, “I support the people of Kentucky exercising their right, because it is our right to decide what it is that we want to do, and not the federal government’s. Criminalizing behavior, if it’s part of the heritage of this state, is in my opinion a bad idea. A bad idea. I will not support it,” according to Boel’s report.

McConnell’s campaign accused Bevin of lying about what he knew of the event.

“Twenty years from now, we will all remember the time when the East Coast con-man thought so little of Kentuckians that he pathologically lied to us about absolutely everything until an undercover camera caught him red-handed at a cockfighting rally,” said McConnell spokeswoman Allison Moore.

This isn’t the first time that Bevin has been caught playing fast and loose with the truth. Earlier this year, he was criticizing McConnell for voting in favor of the TARP program in 2008 even though Bevin himself had endorsed TARP at the time.  Additionally, his campaign has been hampered by a combination of questionable statements by the candidates and straight up bad campaigning. There hasn’t been a poll conducting in the race in more than two months, after a February poll showed McConnell ahead by 42 points, while other polling had shown McConnell ahead by at least 24 points. While it’s possible that the race has tightened somewhat since those polls were taken, the combination of McConnell’s huge fundraising advantage and Bevin’s gaffes, including this cockfighting story, make it seem unlikely that McConnell is in any serious danger.