A big loss for the Tea Party, and a big win for Mitch McConnell, 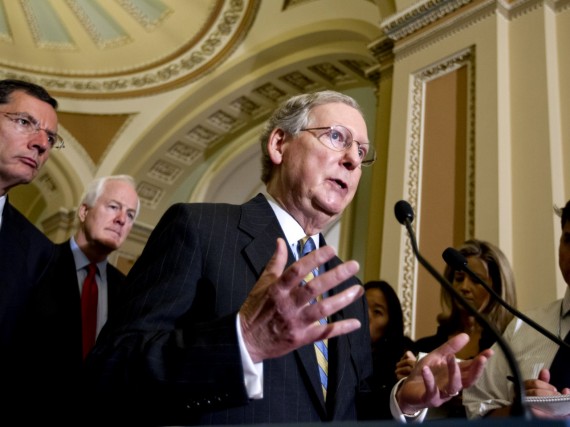 For a time, the GOP Primary in Kentucky between Senator Mitch McConnell and relative political newcomer Matt Bevin was thought by many to be ground zero for the ongoing battle between the Republican “establishment” and the Tea Party. McConnell, after all, had been a target of Tea Party attacks virtually from the moment that the GOP took control of the House in the 2010 elections, and that continued throughout the ensuing years notwithstanding the fact that, like John Boehner, McConnell largely did whatever the Tea Party wanted until it became apparent that pursuing their strategy simply was not going to work. As time went on, though, Bevin’s campaign quickly began to flame out. In no small part, this was due to the fact that McConnell’s fellow Kentucky Senator, Rand Paul, had forged an alliance with the senior Senator from the time he won his own election and was quick to endorse McConnell when the prospect of a Tea Party challenge arose. That helped to create divided loyalties among the more conservative voters in Kentucky and, combined with Bevin’s own missteps on issues ranging from TARP to cockfighting, turned what started out as a potentially competitive contest into a rout.

Tonight, we received confirmation of that rout when McConnell was declared the winner of the race almost as soon as polls closed:

The Associated Press called the race shortly after polls closed in the state, a result that probably would have seemed unlikely when Bevin first declared his intention to run. McConnell was a major target for conservative groups unhappy with the Republican establishment, but, for reasons we articulated earlier today, Bevin never found much traction.

More from the Louisville Courier-Journal:

U.S. Sen. Mitch McConnell has again won the Republican nomination for the U.S. Senate, and Kentucky Secretary of State Alison Lundergan Grimes has won the Democratic nomination, according to The Associated Press.

Their victories set up a multimillion dollar battle in November.

McConnell and Grimes have been looking past their primary competition for weeks as it was clear that they would win their primaries. And three hours before the first Kentucky polls even closed, a group announced it was spending more than a half million to attack Grimes.

Kentuckians for Strong Leadership, a political action group that makes independent expenditures on McConnell’s behalf, announced that it would begin airing the ad on statewide broadcast and cable television stations Wednesday morning and would spend $575,000 for air time over the next 13 days.

The McConnell win, called almost immediately after polls finished closing, is a boost to the GOP establishment on a night that is expected to favor that wing of the party and incumbents generally. The senator led his GOP challenger, Matt Bevin, 62 percent to 33 percent, with only 7 percent of precincts reporting when The Associated Press called the race.

McConnell, 72, had been polling well ahead of the 47-year-old Bevin, who was aided by more than $1 million in spending from outside conservative groups but made several mistakes and faced an onslaught of attacks from the veteran incumbent. McConnell now goes on to face Alison Lundergan Grimes, the Democratic nominee who skated in her primary and is considered a formidable general election candidate.

The Senate Conservatives Fund, one of the groups that poured money into Bevin’s campaign, issued a statement late Tuesday congratulating McConnell, thanking Bevin for “standing up for conservative principles” and calling for Republicans to “unite” in the fight against Grimes. But Bevin himself has not said if he would support McConnell, though he has pledged not to back the Democrat come November.

This is, of course, not all that surprising. As I noted above, as well as in other posts about the race leading up to today, McConnell had clearly pulled away from Bevin long ago according to all of the available polling. Additionally, Bevin’s own missteps and the support that McConnell received from Rand Paul and his supporters seemingly made all of this a foregone conclusion. In the end, the only question was how big McConnell’s margin of victory was and, with about 57% percent of the precincts reporting, McConnell has just about a 24 point advantage over Bevin (I had predicted he’d win by 25 points yesterday, so my ego is kind of hoping he goes over the top there). In other words, it wasn’t even a contest.

Inevitably, there will be talk in the coming days about what this means for the ongoing battle inside the Republican Party between the “establishment” and the Tea Party and its supporters. On that issue, it strikes me that there isn’t any way to characterize this as other than an utter defeat for the Tea Party. McConnell has been in their cross hairs for years now, and Rand Paul’s victory in 2010 over an establishment supported nominee in the GOP Primary was their inspiration. For the most part, they used the same playbook they had in previous Republican primaries in 2010 and 2012 where incumbents and establishment candidates were challenged, and that made sense given the fact that they had succeeded with that strategy in the past. The difference in Kentucky this time, as it has been in other races around the country, is the fact that the so-called “establishment” has been fighting back in a way that they didn’t do in previous election cycles. The fact that they’ve been winning suggests that the influence of the Tea Party inside the Republican Party, as well as groups like FreedomWorks, the Club For Growth, and Senate Conservatives Fund, may well have reached its zenith.

Things aren’t likely to go this easy for Mitch McConnell going forward. If the polls are to be believed, he faces a formidable challenge from Alison Lundergan Grimes, the Democratic nominee. It’s worth noting, however, that the polls were also telling us that McConnell was in serious danger of losing the nomination when this race started last year, and McConnell has proven throughout his political career that his is survivor. Counting him out would be foolish and, right now, I’m thinking that he will most likely eke out a win over Grimes in the fall.