Congressman John Conyers Apparently Failed To Qualify For The Ballot

One of the longest serving Members of Congress finds himself likely excluded from the ballot and having to run as a write-in candidate if he wants to stay in office:

At issue is whether two of the people in charge of gathering signatures for Conyers were registered voters, which is a requirement under Michigan law. Legal counsel for Conyersstressed to Roll Call that they expected him to make it onto the ballot.

If Conyers cannot get on the Democratic primary ballot, he would have to run as a write-in candidate in order to retain his seat.

If Conyers is somehow re-elected, he will become the longest serving Member of Congress due to the retirement of his fellow Michigan Democrat John Dingell. How his campaign managed to make a mistake like this given the fact that Michigan’s ballot access laws aren’t very stringent, however, is unclear at the moment. 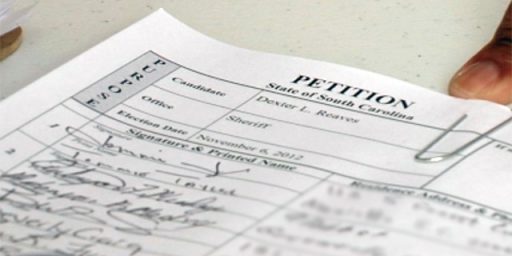