A Connecticut Judge has allowed a lawsuit against the manufacturer and seller of the weapons used in the Sandy Hook Shootings to go forward, but a Federal Law appears to make dismissal inevitable.

A Connecticut trial court judge has allowed a lawsuit against the manufacturer of the gun used in the Sandy Hook shootings in December 2012 to go forward, but the victory seems likely to be short-lived thanks to a Federal Law that bars liability lawsuits against gun manufacturers:

Superior Court judge has denied a motion to dismiss a lawsuit accusing gun makers and sellers of liability in the Sandy Hook Elementary School shooting, saying the broad immunity granted to the firearms industry does not strip the court of jurisdiction to hear the claim.

While the Protection of Lawful Commerce in Arms Act generally insulates gun companies from liability, Judge Barbara Bellis said the law could be used to attack the legal sufficiency of the plaintiffs’ claims, but not to have the case thrown out at this early stage.

Attorneys for the plaintiffs – nine victims’ families and an administrator who was shot and survived – declared the ruling a major win, as victories against firearms companies are extremely rare. But the ruling does not preclude the defendants from reasserting their claims of immunity under federal law in a future motion.

The lawsuit accuses the Remington Arms Co. and other defendants of negligently selling to civilians a weapon the plaintiffs claim is suitable only for the military and law enforcement. At a hearing in February, Bridgeport lawyer Josh Koskoff argued against dismissing the case, saying the lawsuit’s claim of “negligent entrustment” is an exception to the Protection of Lawful Commerce in Arms Act.

But Bellis ruled on a narrower issue, agreeing with the plaintiffs that she has jurisdiction to continue with the case, but not ruling on whether the federal law blocks the plaintiffs from pursuing their claim.

“At this juncture,” Bellis wrote, “the court need not and will not consider the merits of the plaintiffs’ negligent entrustment theory.”

Koskoff cheered the ruling Thursday. “We are thrilled that the gun companies’ motion to dismiss was denied,” he said. “The families look forward to continuing their fight in court.”

Even if the next round in that fight is a renewed effort by the defendants to assert immunity under the federal law, Thursday’s ruling could prove a significant victory for the plaintiffs if, in the meantime, Bellis permits them to begin the process of “discovery,” enabling them to demand internal documents or depose gun industry officials.

The Federal law in question in this case, the Protection of Lawful Commerce In Arms Act was passed in 2005 in the wake of a series of largely unsuccessful lawsuits against gun manufacturers and sellers by crime victims and some large cities which attempted to hold the manufacturers and sellers responsible under traditional tort and products liability law for violence committed by criminals and other gun incidents. Notwithstanding the fact that it was generally winning in court, the gun industry, as well as Second Amendment groups, began to push for a Federal law that would bar most lawsuits against manufacturers and sellers in Federal or State court. The result was the PLCAA, which passed the House of Representatives by a vote of 283-144 and the Senate by a vote of  65-31, this included the votes of  59 Democrats (including Independent Bernie Sanders) in the House and 14 Democrats in the Senate. The law itself is set forth at at 15 U.S.C. §§ 7901-7903.

At it’s base, the PLCAA provides, in Sec 7902, that “a qualified civil liability action may not be brought in any Federal or State court.” Sec. 7903(5)(A) defines a ‘qualified civil liability action’ as “a civil action or proceeding or an administrative proceeding brought by any person against a manufacturer or seller of a qualified product, or a trade association, for damages, punitive damages, injunctive or declaratory relief, abatement, restitution, fines, or penalties, or other relief” related to the criminal or other misuse of a weapon. The lawsuit filed by the victims and survivors of the Sandy Hook shootings clearly fall within this definition so, unless some exception applies, it would appear that their lawsuit is r clearly barred by the PLCAA and that its only a matter of time before it is dismissed. The exceptions to the bar on lawsuits are covered in 7903( 5)(A)(i-vii), but the attorneys for the Plaintiffs appear to be relying solely on the exception set forth in  5(A)(ii) which provides a right to sue for so-called ‘negligent entrustment,’ which is further defined in 7903(B) as “the supplying of a qualified product by a seller for use by another person when the seller knows, or reasonably should know, the person to whom the product is supplied is likely to, and does, use the product in a manner involving unreasonable risk of physical injury to the person or others.” ‘Seller’ is further defined in 7903(6)(a-c) as an importer, dealer, or person engaged in the regular business of selling guns to the general public, a definition which raises the question of whether or not a manufacturer such as Bushmaster can be considered a ‘Seller’ under the statute because if it isn’t then a negligent entrustment cannot be maintained against it, but only (potentially) against the final seller of the gun.

So, based on all of this, it seems clear to me that the lawsuit against at least Bushmaster, the manufacturer in this case, is barred by the PLCAA. First of all, as noted the suit itself clearly falls within the definition of the suits generally barred by the statute in that it is a claim for wrongful death and other civil actions related to the criminal misuse of a weapon by a third party. As to the exception claimed by the Plaintiff’s attorneys, since I don’t have access to the Complaint in this matter I can’t say for certain whether or not they have plead sufficient facts to put forward such a claim. However, the fact that this exception only applies to ‘sellers’ and that the definition of ‘seller’ under the law does not seem to include manufacturers suggests strongly that Bushmaster’s immunity under the law cannot be defeated by this defense. The Plaintiff’s may still be able to assert this claim against the entity that actually sold the weapon to Adam Lanza’s mother, but that claim will depend on whether or not they have sufficient evidence to support a claim that the seller knew or should have known that she would permit her son, who was not old enough under Connecticut law to own a gun himself, to have access to the weapon, that her son had a history of mental health issues, or that he would use the weapon in the manner that he did.  Indeed, even if Bushmaster is considered a ‘seller’ for the purposes of this exception it is hard to conceive of how it would have actual or constructive knowledge of any of these facts given that they never had any direct dealings with Mrs. Lanza, or anyone else connected to the shootings.

The Judge in this case appears to have largely dodged most of the issues raised by the PLCAA by treating this round of motions as a challenge to the Court’s subject matter jurisdiction, but this only seems to be delaying the inevitable, at least as it applies to Bushmaster and probably the gun dealer as well. As the Judge seems to concede, the Defendants in this case would likely succeed in getting the case dismissed on a motion arguing that the Complaint fails to state a legal claim on which relief can be granted. Additionally, it’s possible that the Defendants will appeal the ruling here and that a higher level Court in Connecticut will rule that the case must be dismissed even at this early stage. Why the Court even bothered to let the claim go forward given this, and given the clear language of the law is unclear. Whether or not one finds the PLCAA to be good policy is really quite irrelevant, because it is law and in this case the outcome appears to be inevitable. Proceeding any further seems to be a waste of judicial resources.

Even before this week’s ruling, the PLCAA was in the news thanks to the race for President. As I noted above, Bernie Sanders voted in favor of the PLCAA when he was a member of the House of Representatives, while Hillary Clinton was among the ‘No’ votes in the Senate. This vote is perhaps the most notable exception to Sanders’ generally left-ward tilt when it comes to politics and has been attributed by observers to the generally pro-gun attitudes of Vermont voters. Clinton has hit Sanders several times in the debates that the two have had over the past months and, while he appeared to waiver on his support for this law a bit in January, Sanders continues to defend his 2005 vote even though it puts him outside the mainstream of the Democratic Party.

In any case, we’re likely to here more about the PLCAA as this lawsuit moves forward but ultimately the outcome seems clear. As far a the manufacturer is concerned, the case should be dismissed based on the clear language of the statute. With respect to the seller, the outcome seems clear but it may require further proceedings to get to that point. As I said, this may be an unpalatable outcome but as long as this law is in place it is the correct one. 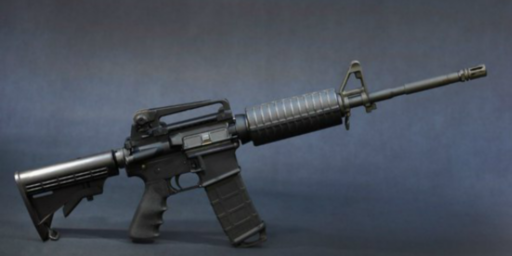