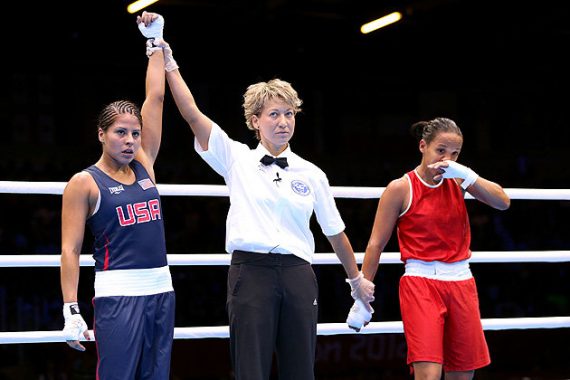 And, incidentally, the first Cover Girl model as well.

Esparza defeated Karlha Magliocco of Venezuela in a women’s flyweight division bout on Monday, 24-16, advancing to the semifinals on Wednesday and a match against top-seeded favorite Cancan Ren of China at ExCeL Centre.

[…]
The victory guarantees that Esparza will medal in London. The format for boxing has each of the four semifinalists earning a medal, with the winners vying for gold and silver while the semifinal losers both earn bronze.

Esparza, 23, gained fame before the London Games as a model for Cover Girl, thanks in part to her pre-match ritual: applying a light base of makeup with some blush and mascara. According to People magazine, she also “puts on perfume before a fight, [and] makes sure to exfoliate and hydrate her skin.”
So, at the very least, her face is well maintained before someone punches it. 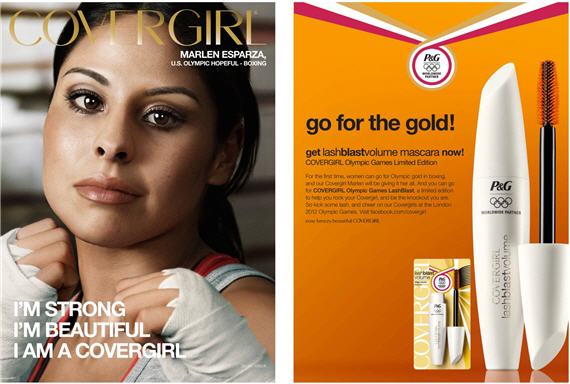 To dismiss her as a Cover Girl model is, of course, unfair. Indeed, she’s a model precisely because she gained notoriety as a boxer.

Still, aside from being mildly amusing, it’s interesting to note how quickly American standards of female beauty have evolved. Twenty–certainly twenty-five–years ago, athletic women were hardly the ideal. Women who were taller than 5’9″ or so were self-conscious and women who were muscular were considered “manly.” Now, female boxers are cover models and female soccer and volleyball players are marketed as sex symbols to help draw male viewers. While not exactly the same as being viewed in the same way as male athletes, it’s a marked turn for the better.