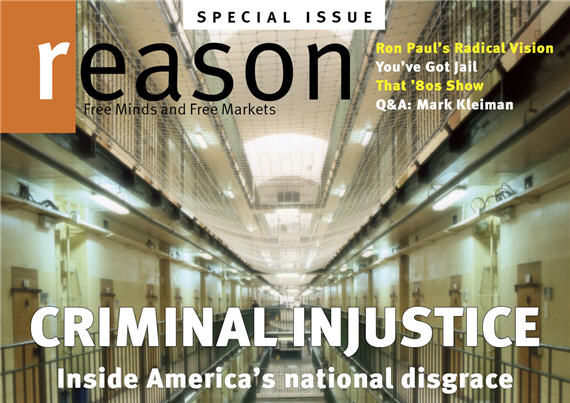 It’s fitting that Reason‘s last issue with Radley Balko on the masthead is devoted to outrages in America’s criminal justice system. He points us to Matt Welch‘s editor’s note.

A system designed to protect the innocent has instead become a menagerie to imprison them. A legal code designed to proscribe specific behavior has instead become a vast, vague, and unpredictable invitation to selective enforcement. Public servants who swear on the Constitution to uphold the highest principles of justice go out of their way to stop prisoners from using DNA evidence to show they were wrongly convicted. Even before you start debating the means of the four-decade crackdown on crime and drugs, it’s important to acknowledge that the ends are riddled with serious problems.

America has one-quarter of the world’s prisoners. More than 7 million people are under correctional supervision in this country. These staggering statistics—no other country comes close in percentage terms, let alone raw numbers—have serious consequences. For one thing, there is the fiscal cost: The corrections system lags only Medicaid in government spending growth on the state level. Yet most prisons are overcrowded, underserviced, and exponentially more dangerous than any decent society should tolerate.

Worse are the cascading social effects, some of which you might not initially expect. Although prison is overwhelmingly the province of men, black women in America’s inner cities have some of the highest HIV infection rates in the developed world. Why? Because their male partners contracted the virus behind bars, via consensual sex or rape, often going undiagnosed while serving out their terms.

Very few in our political and media classes are familiar with the communities most ravaged by crime and punishment. No politician ever lost an election by alienating the ex-con vote (in no small part because in a dozen states, ex-felons who have completed parole are still permanently barred from voting). It is no accident that the people most likely to languish behind bars—poor minorities, sex offenders, illegal immigrants—tend to be among the most reviled groups in American society.

To the extent that we even think about our prison population bomb, we have allowed ourselves to believe it’s an acceptable price to pay for the recent reduction in crime. But the rates of incarceration and crime aren’t so easily correlated, let alone quantified in terms of cause and effect. And the notion that we are keeping dangerous predators off the streets is belied by the fact that an estimated 1 million prisoners in the U.S. are serving time for nonviolent offenses, predominantly related to drugs.

Why did all this happen? Because we let ourselves be OK with the ends justifying the means.

Would you torture a terrorist suspect if he could reveal enough information to prevent a ticking time bomb from exploding in a big city? That was the armchair interrogator’s debate question eight years ago, recently revived when a variety of U.S. intelligence sources finally pinpointed the hiding place of 9/11 mastermind Osama bin Laden. It was the intellectual successor of CNN anchor Bernard Shaw’s famous debate question to 1988 Democratic presidential nominee Michael Dukakis: “Governor, if Kitty Dukakis were raped and murdered, would you favor an irrevocable death penalty for the killer?”

These questions are intended not to further discussion but to end it. Only a monster would oppose either final retribution or preventive action against those who murder innocents. Even though the examples are always and necessarily fictional, these are the ultimate in cost-benefit analysis and base emotionalism. The mind-set behind them has dominated America’s policies for using deadly government force for decades.

Alas, I don’t expect that mindset to change any time soon. We can’t get Americans excited enough about abuses of police authority that target ordinary citizens to do anything about them; we’re surely not going to create a revolution against a system that primarily affects the underclass.