A true, albeit largely anonymous, hero of humanity has passed away. 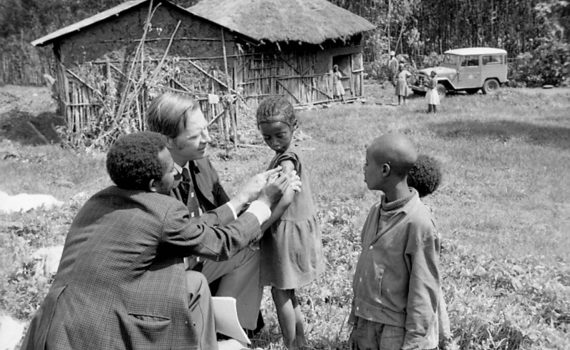 D.A. Henderson, a physician and researcher who led the effort to rid the world of one of the most devastating diseases to strike humanity, has died at the age of 87:

Dr. Donald A. Henderson, a leader of one of mankind’s greatest public health triumphs, the eradication of smallpox, died on Friday in Towson, Md. He was 87.

Dr. Henderson, who lived in Baltimore, died in a hospice of complications of a hip fracture, including infection withantibiotic-resistant staphylococcus, a dangerous pathogen he had himself researched and raised alarms about, said his daughter, Leigh Henderson.

Starting in 1966, Dr. Henderson, known as D. A., led the World Health Organization’s war on the smallpox virus. He achieved success astonishingly quickly. The last known case was found in a hospital cook in Somalia in 1977.

Long after the disease was officially declared eradicated in 1980, he remained in the field as a dean of what is now the Johns Hopkins Bloomberg School of Public Health and as an adviser on bioterrorism to several presidents.

Euphoria over the smallpox victory led to calls for the elimination of measles, polio, Guinea worm and other diseases, and Dr. Henderson was a sometimes irascible but often prescient critic of flaws in those campaigns. None have yet been successful.

The only other disease to have been banished from the earth is rinderpest, a little-known relative of measles that kills hoofed animals and once caused widespread starvation in Africa; it was eradicated in 2011.

Like any war, the one against smallpox involved thousands of foot soldiers — notably outbreak tracers and vaccinators — and more than a few generals. They came from both the United States and the Soviet Union, which first called for the disease’s elimination, as well as from other nations.

But, along with Dr. William H. Foege, now an adviser to the Bill and Melinda Gates Foundation, Dr. Henderson was considered a field marshal whose combination of vision, bluntness, tenacity and political acumen carried the campaign to victory.

Smallpox, caused by the variola virus, was long one of mankind’s most terrifying scourges. Called the “red plague” or the “speckled monster,” it killed almost a third of its victims, often through pneumonia or brain inflammation. Many others were left blind from corneal ulcerations or severely disfigured by pockmarks.

It is thought to have emerged from a rodent virus more than 10,000 years ago, and signs of it are found in the mummy of Pharaoh Ramses V of Egypt. Some terrified ancient civilizations worshiped it as a deity.

It carried off many European monarchs and buried the lines of succession to thrones from England to China. Because it killed 80 percent of the American Indians who caught it, it was a major factor in the European conquest of the New World.

Three American presidents survived it: George Washington, Andrew Jackson and Abraham Lincoln. In the 20th century, before it was extinguished, it was blamed for at least 300 million deaths.

The victory over smallpox proved the power of vaccine. Before the 18th century, some peoples, especially in Asia Minor and West Africa, inoculated themselves by piercing their skin with pus from victims or inhaling dried pox scabs. Although that sometimes produced a full-blown lethal infection, it killed much less often than epidemics did.

Donald Ainslee Henderson was born on Sept. 7, 1928, in Lakewood, Ohio, the son of a Union Carbide engineer and a nurse. He graduated from Oberlin College, got his medical degree from the University of Rochester and did his residency at a hospital in Cooperstown, N.Y.

In 1955, he joined the Epidemic Intelligence Service, the elite disease-detective branch of the Centers for Disease Control and Prevention, and in 1960, as the chief of viral disease surveillance, he devised a campaign to eliminate smallpox and control measles in Africa. Smallpox had been eliminated in much of the West shortly after World War II, but it persisted in Brazil, Africa and South Asia.

In 1966, he was sent to Geneva to run the World Health Organization’s global campaign.

“The sense at the W.H.O. was that this was an impossible mission, so they chose a young man who didn’t have a reputation to tarnish,” said Dr. Thomas V. Inglesby, the director of the U.P.M.C. Center for Health Security, where Dr. Henderson was a resident scholar at his death. “I don’t want to say as cannon fodder, but something like that.”

World Health Organization campaigns to end yellow fever and malaria had both petered out, and the organization adopted the smallpox goal only after the Soviets and the Americans insisted, Dr. Foege said. “D. A. always said they wanted an American to blame,” he added.

He was given little staff or support, but remaining on the C.D.C. payroll gave him independence.

“Although outspoken, he understood the absolute importance of diplomacy, and he had the ability to recognize who could go out in the field and get things done with a minimum of supervision,” said Dr. J. Michael Lane, another leader of the fight, now affiliated with Emory University Medical School.

Dr. Henderson spent much of his time visiting smallpox-stricken countries, some of which were also caught up in civil wars. He filed detailed progress reports and threatened to quit when W.H.O. officials asked him to tone them down, Dr. Inglesby said.

When the Soviets shipped weak vaccines, Dr. Foege said, “he went to Moscow and confronted them.”

The campaign developed a freeze-dried vaccine that could withstand tropical heat and be given either with a compressed air “injection gun” or by putting a drop on a forked needle and jabbing it just beneath the skin.

Dr. Henderson quickly realized that trying to vaccinate vast populations was futile and switched to “ring vaccination.” Dr. Foege, who is considered the father of this tactic, said it was “invented by accident” during a 1967 Nigerian outbreak when he had very little vaccine on hand.

“The first night, we asked ourselves what we would do if we were a virus bent on immortality,” he said. They radioed every local missionary asking them to send runners to find out which villages had cases. They sent 80 percent of their vaccine to those villages, using it on the family of each case and all their recent contacts. The last 20 percent went to “anywhere we thought the virus would go next” — which was mostly to market towns where farmers and hunters sold their goods.

“It took D. A. about a year to come around to ring vaccination,” Dr. Lane, who worked with Dr. Foege, said. “But once he did, he was an enthusiastic proselytizer.”

The campaign, many experts have noted, succeeded just in time. A few years later, the virus that causes AIDS spread across Africa. Because the live smallpox vaccine can grow in an immune-compromised person into a huge, rotting, ultimately fatal lesion, it would have been impossible to deploy it.

In 1977, success in hand, Dr. Henderson became dean of the Johns Hopkins University School of Hygiene and Public Health.

“He was an imposing guy — physically big and very confident,” said Dr. Michael J. Klag, the school’s current dean, who was a student in that era. “He did not suffer fools gladly, and you were never sure if you were a fool or not.”

Dr. Henderson shifted the curriculum to send more students into the field. “He felt it was an ivory tower and needed an infusion of practical experience,” Dr. Klag said.

He was also in demand as an expert on bioterrorism. In 1998 he was a founding director of the Johns Hopkins Center for Civilian Biodefense Strategies, which was later taken over by the University of Pittsburgh’s medical school. After the Sept. 11, 2001, attacks and the mailing of envelopes filled with anthrax, he became the chief adviser on public health preparedness to the secretary of Health and Human Services.

He gloomily foresaw failure for most other disease-elimination campaigns. The “siren song of eradication,” he once wrote, had led to goals that were more “evangelical” than attainable. His doubts passed like thunderclouds across the sunny optimism preached by those raising money for those causes.

The problem, he would explain, was that each viral foe was so different. Smallpox had many weaknesses to exploit; it had no animal host. Every case can be found because victims have pox on their faces, and one vaccination provides lifetime immunity.

Polio, by contrast, can have dozens of silent carriers before it paralyzes one child. The vaccine must be kept refrigerated, and it takes multiple doses — as many as 10 in some children. And in rare cases the live vaccine mutates into a dangerous form that can itself circulate and paralyze, in effect opening up a second front that requires a new campaign.

In 2011, when Bill Gates threw the full weight of his foundation into fighting polio, he struggled to explain how he would overcome such obstacles and, at the end of an interview, turned to an aide and said aloud, “I’ve got to get my D. A. Henderson response down better.”

While these efforts are obviously team efforts rather than just the work of one man, it’s obvious that Dr. Henderson’s leadership and tenacity were a crucial part in the successful conclusion of what was at the time the most ambitious public health efforts of its time, and which remains the most successful such effort in human history. Thank you Dr. Henderson for a job well done.