Residents of the D.C. Metro area can take some solace in the fact that people in Los Angeles and San Francisco have longer commutes.

Washingtonians spend an average of 69 hours a year in traffic jams, according to a national study released today that once again found that the region has the third-worst traffic in the nation. The study, done by the Texas Transportation Institute and based on 2003 statistics, also found that congestion is worsening in cities across the country both small and large mainly because too few new roads and rail lines are being built.

Kirby added that the rankings are as much a reflection of population growth as traffic-solving measures. “When you rank areas, those that have been growing the fastest, like ourselves, are going to be higher on the list — and getting worse.”

Only the Los Angeles and San Francisco areas have worse traffic than Washington. This year’s big mover was Atlanta, which debuted in the “very large” city category at number four, just a notch below Washington.

Overall, the report offered little solace for congestion-beleaguered Washingtonians. It found that in 2003, the average commuter spent three hours more per year in congestion; collectively, Washingtonians sat in traffic for 145.5 million hours; tie-ups cost area drivers an estimated $2.46 billion, or $577 per commuter, and “rush hour” lasts for fully a third of the day.

The report showed that the Washington area would have the worst congestion in the nation if not for its public transportation systems. Without Metro and other services, the average Washingtonian would have spent 28 more hours per year stuck in traffic, down slightly from the previous year, and the region would have spent nearly $1 billion more in congestion costs.

Of course, as more and more D.C. area folks move to the suburbs not served by Metro, the problem is worsening by the day.

Only job loss or major commitments to expand capacity will decrease congestion dramatically, [Tim Lomax, a co-author of the Urban Mobility Report] said. Refusing to build more roads and transit systems won’t discourage population growth, Lomax said. Take fast-growing Austin, Texas, for example. In 1982, the average peak-hour traveler was delayed by 11 hours a year. That delay increased to 51 hours in 2003, the report said. “Austin didn’t add transportation capacity in the ’80s or ’90s,” Lomax said. “The ‘If you don’t build it, they won’t come’ philosophy didn’t work.”

Congestion can also be reduced by managing traffic better. The report said such techniques as coordinating traffic signals, smoothing traffic flow on major roads and creating teams to respond quickly to accidents reduced delay by 336 million hours in 2003.

More telecommuting would be helpful, too. 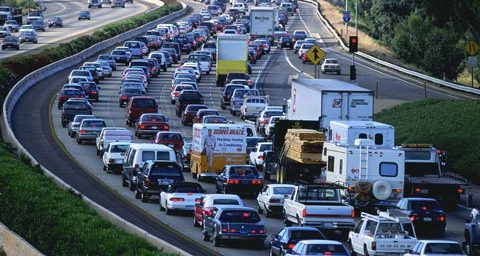