Republicans are much closer to America's political center than Democrats.

Paul Waldman points me to a recent Pew study titled “Voters Rate Political Parties’ Ideologies” and to this graphic in particular: 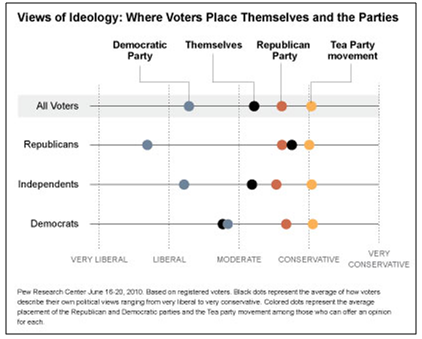 From the Pew write-up:

Waldman, a liberal who naturally views the Republicans as the more extreme of the two major parties, is having a hard time wrapping his head around this.

What’s really interesting here isn’t so much the views about Democrats — that’s pretty much what you’d expect, that voters of the opposing party would find it to be far more extreme than its own partisans, who know where their own party has disappointed them, would place it. What’s odd, though, is the fact that on average there’s so little difference between how Republicans and Democrats see the GOP. There’s obviously some diversity within those groups — some Democrats see the GOP as extreme, while others see it as moderate — but it’s still notable.

So why is this? It’s hard to say, but my nominee would be the differing media systems partisans are drawn to. Conservatives are more likely to seek out highly partisan information sources — Fox News, Rush Limbaugh, etc. — than Democrats are. The latter may take in the occasional episode of Keith Olbermann or Rachel Maddow, but they’re getting most of their news from more neutral places like NPR and CNN. What makes the difference is that the idea that the Democratic Party is a bunch of socialists with a radical leftist agenda is a core component of the rhetoric on Fox, Limbaugh, et al. If you get your news from them, you’ll hear that message every day, again and again. And eventually you’ll start to believe it.

I don’t doubt that there’s some reinforcing mechanism from conservative media outlets, although my guess is that it’s minor.  First, as Waldman himself notes, the tendency dates back to at least 1985, well before the polarization of media.  Second, the chief reason for the rise of Limbaugh and Fox News was the sense that the national media was biased to the left.

The more obvious explanation is that the center is further to the right than Waldman thinks.   Indeed, Pew has another couple of graphics — similar to those we’ve seen dozens of times elsewhere over the years — that reinforces this point: 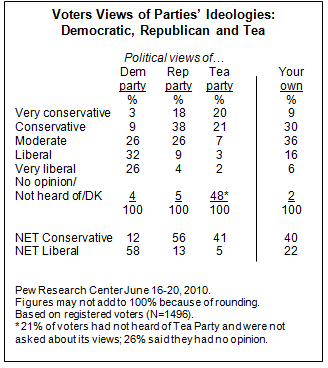 Nearly twice the percentage of respondents considered themselves conservative (40) as liberal (22).  And the next chart really drives the point home: 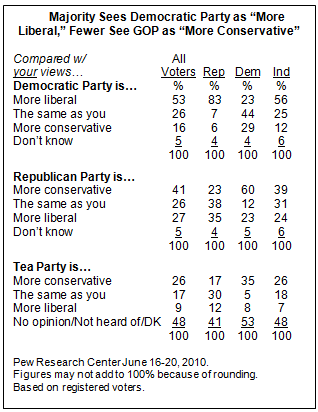 There’s some debate as to how people perceive the terms “liberal” and “conservative” and whether they mean the same thing to most people.  Regardless, Americans have aligned themselves with the term “conservative” at a much higher rate for decades.    And they think the Republican Party is also “conservative” while the Democratic Party is “liberal.”  So, if we’re defining “centrist” as the median ideology of America at any given moment in time, the Republicans are much closer to it than Democrats.